Things to do in Osijek, Eastern Croatia 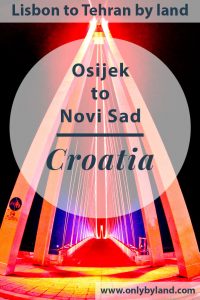 Things to do in Osijek

I was staying at Hotel Central, the most historic hotel in Osijek.  Furthermore, they offer complimentary opera or museum tickets to their guests. 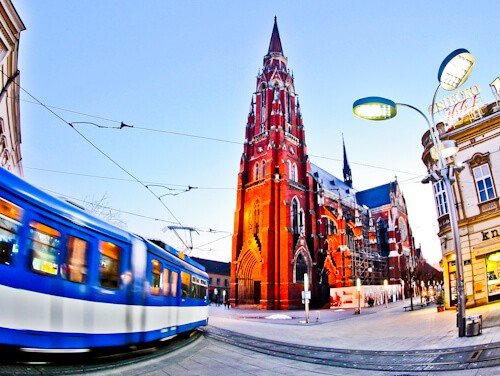 The Church of St Peter and Paul is referred to as the Osijek Co cathedral.   It’s the co cathedral of the Roman Catholic Archdiocese of Dakovo.  The town of Dakovo is a short drive away and it’s worth visiting to see this impressive church as well.  An interesting fact about Osijek cathedral is that it’s one of the tallest buildings in Croatia.  Furthermore, it’s the tallest building in Slavonia, followed by the cathedral in Dakovo.  For this reason, it’s the iconic landmark as well as one of the top things to do in Osijek. 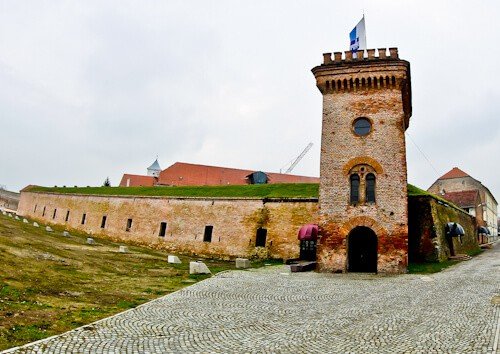 Croatia is famous for its old towns which are surrounded by fortresses, Dubrovnik, in particular.  Osijek has an old town known as Tvrda which is surrounded by Osijek Fortress.  However, this fortress has not been maintained or restored.  As a result you’ll see a fortress in its natural state.  An advantage of this is that there are not thousands of other tourists.  In fact, you’ll probably have the fortress to yourself and you don’t have to pay to climb the walls.  Built at the end of the 17th century, the purpose of the fortress was in brief, to defend Osijek from an Ottoman attack. 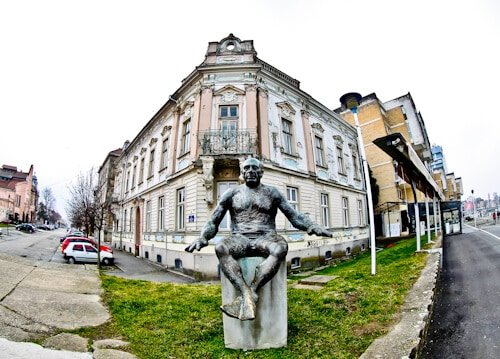 As you walk around Osijek you may notice several buildings with bullet holes.  It’s nothing on the scale that you’ll see in the buildings of Mostar, Bosnia.  Nevertheless, there are too many damaged buildings for you not to notice.  This is structural damage from the Croatian War of Independence.  You’re most likely to see the damaged buildings on the banks of the River Drava as well as around the old town of Tvrda.  In addition, there are bullet holes in the Osijek Fortress. 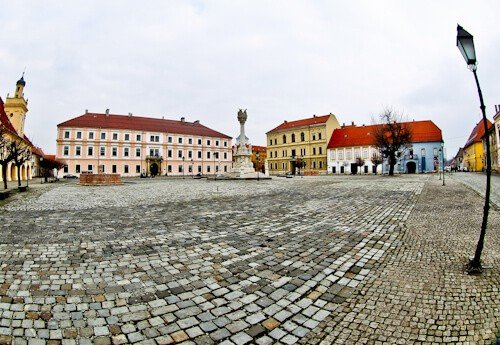 Tvrda is the historic town of Osijek which is encircled by the Osijek Fortress.  In Tvrda there are lots of traditional buildings from the 18th century.  Unlike the fortress, these have all been restored and painted.  As a result, Tvrda is colorful and picturesque.  The central square has the Votive monument of the Holy Trinity in the center.  In addition, there are lots of restaurants, bars and hotels in Tvrda and it’s considered to be the nightlife zone of Osijek.


Things to do in Osijek – Museum of Slavonia 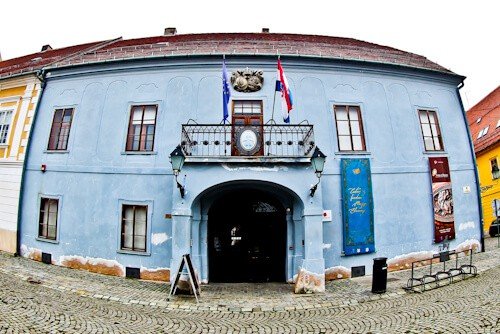 The museum of Slavonia is one of the oldest museums in Croatia.  It’s worth visiting just to enter the Baroque buildings, not to mention discover about the history.  In fact there are over 500,000 historic artefacts in this museum.  Additionally, there is the largest museum library in Croatia.  Visit the official Museum of Slavonia website for more details.

Things to do in Osijek – Opera 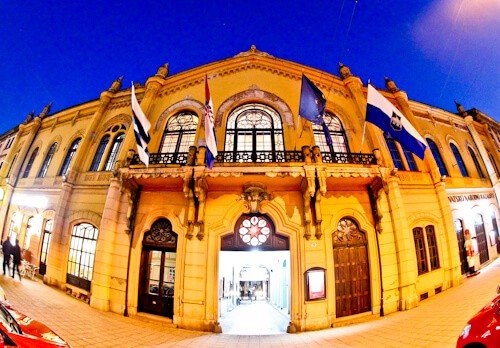 The Croatian National Theater hosts the Osijek opera.  It’s a Baroque style building which was built in the 19th century.  Furthermore it was damaged in the Croatian war of independence before restoration in 1994.  Guests at the Hotel Central receive a free ticket for an Osijek opera performance.  Additionally, Hotel Central is a 2 minute walk from the opera. 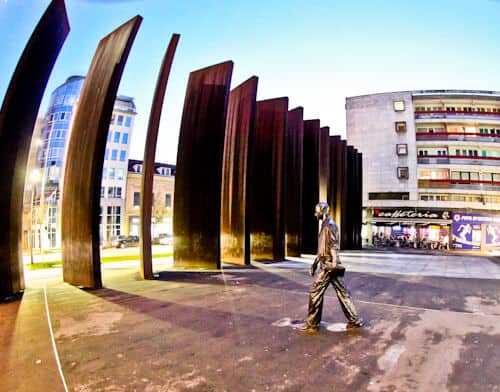 Freedom Square is located in the upper town of Osijek.  The Monument to Croatian War Veterans is suitably the landmark of Freedom Square.  It was created to honor the fallen soldiers of the Croatian War of Independence.  The monument is made of steel which erodes.  As a result this looks like blood, dripping down the pillars. 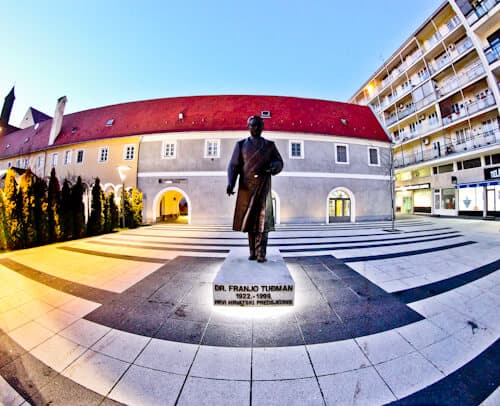 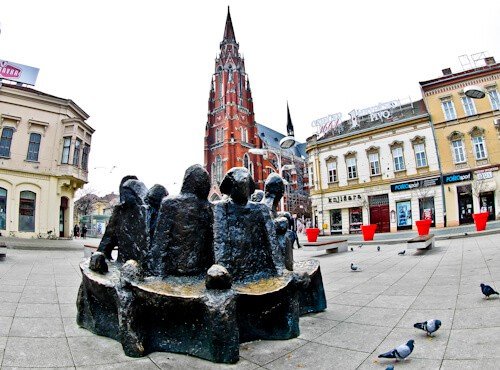 The main square of upper Osijek is Ante Starcevic Square.  This square is surrounded by restaurants and high street shops.  There is a controversial Group of Citizens statue which has been removed and replaced.  Furthermore, there are fountains which are a good place for kids to play. 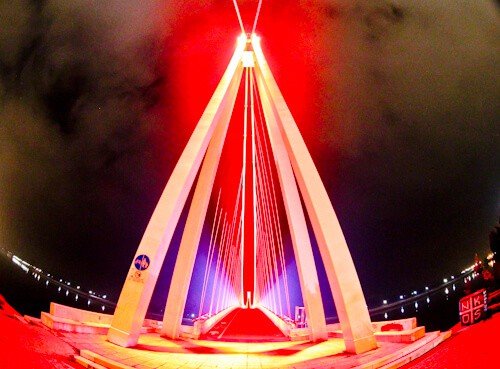 Osijek Pedestrian Bridge was completed in 1981 before being damaged in the Croatian war of independence.  As a result, it was completely modified in 2007.  For this reason, you won’t see any bullet holes in the bridge.  Today, it stands an Instagrammable bridge.  Photographers can take their pictures from a distance with a perfect reflection in the river below.  Furthermore, it’s lit up beautifully at night, I witnessed it light up blue, green as well as red. 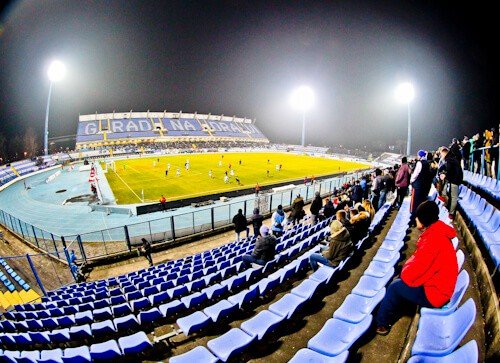 NK Osijek are one of the few football teams never to have been relegated from the Croatian First League.  Furthermore, they are the most successful team in Slavonia.  If you’re lucky, they’ll be playing when you’re in town and it only costs a few Euros to watch a game.  Read about my NK Osijek matchday experience. 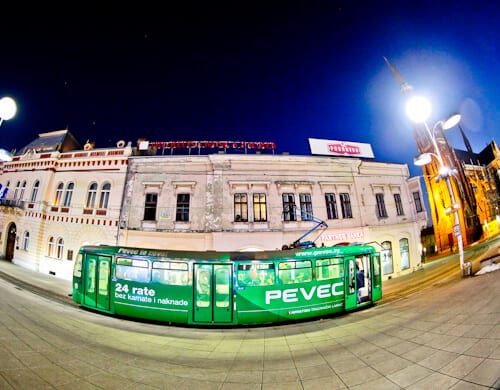 Osijek is home to some very colorful trams.  In fact there are different advertisements on each tram, as a result each tram is unique.  A traditional tram, with a Baroque style building in the background makes an excellent photo.  Nevertheless, my favourite place for tram spotting is Sarajevo which have Jaffa Cakes trams!

How to get from Osijek to Novi Sad, Serbia 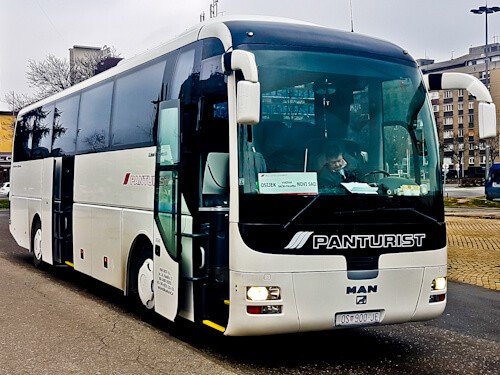 There are a few buses each day from Osijek to Novi Sad, Serbia.  The journey should take less than 3 hours.  Remember, you’re leaving the European Union and entering Serbia on this route, so check the entry requirements.  However, it’s unlikely you’ll need a visa for Serbia.