Things to do in Prague, Czech Republic

Prague is the capital city of the Czech Republic which is part of the EU and Schengen communities.  The historic city of Prague and the castle complex are both UNESCO sites.  Things to do in Prague include;

Hotels in Prague are really good value even in the center of the historic city.  If you stay outside the historic center hotels are significantly cheaper and you can take the underground train into the city. 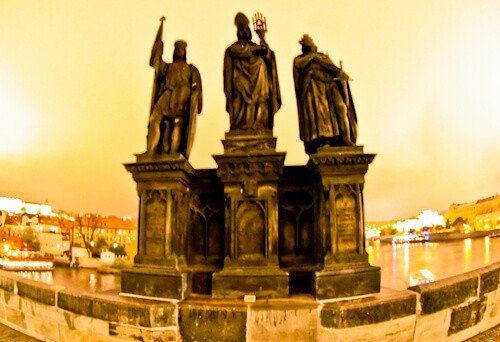 Charles Bridge was completed in the 15th century after around 50 years of construction.  It crosses the Vltava River and is now a footbridge but it used to be one of the major trade routes between Eastern and Western Europe.  The bridge has towers on each side and is considered to be one of the finest Gothic structures on the world.  There are 30 statues of saints lining each side of the bridge (above).

The Charles Bridge is famed as being a romantic bridge but it’s likely that it will be full of tourists when you visit.  I’d recommend taking your partner to the bridge at night (above) or early morning.  At these times you are more likely to have the bridge to yourselves and have a true romantic experience.

Hradcany Castle (above) is located on top of a hill a short walk uphill from the historic center of Prague.  For fans of UNESCO world heritage sites the castle complex is listed as a UNESCO site.  If you need another reason to visit the castle then the fact that it’s the biggest ancient castle in the world should tempt you.  The history of the castle dates back to the 9th century but it is now a modern looking castle and a mix of various architectural styles.  In 1939 when Germany took over Czechoslovakia, Hitler infamously stayed in the castle admiring his new possession.  Nowadays the castle is the home of the current Prime Minister of the Czech Republic. 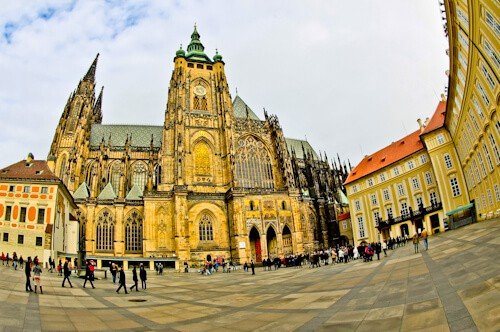 St Vitus cathedral is located in the Prague / Hradcany Castle complex and is visible from Prague old town.  It is a Gothic Cathedral and construction started in the 14th century.  Almost 600 years later after many problems including lack of funds and a fire, the Gothic Cathedral was finally completed.  As it stands in the central square of the castle and is the tallest building in the complex you are guaranteed to see it. 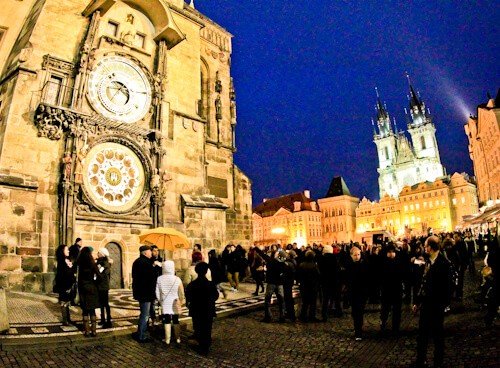 The Prague Astronomical Clock is the oldest functioning astronomical clock in the world.  It dates back to 1410 and is located on the Town Hall in the Old Town Square (above).  The clock performs a show every hour called “The Walk of the Apostles”.  The clock is surrounded by tourists for the hourly show which doesn’t really matter as you are looking up to the clock.  Legend has it that if the clock was neglected and stopped working then the city of Prague would suffer. 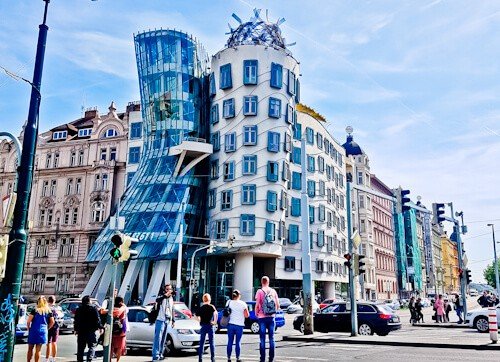 The Dancing House, also know as Fred and Ginger, is located on the riverfront of the Vltava River.  It has the name Dancing House or Fred and Ginger because it resembles a couple dancing.  Fred and Ginger refers to the famous dancers Fred Astaire and Ginger Rogers.  It’s worth visiting this house for making an Instagrammable photo if nothing else.  There is a top floor restaurant in the building which offers wonderful Prague city views.

Things to do in Prague – Prague Old Town Square

The Old Town Square of Prague is often the meeting point for walking tours of the city.  Located in the center of the city, it houses many sites including the Old Town Hall, Baroque St. Nicholas Church, Church of Our Lady before Tyn as well as many traditional Czech houses, restaurants and bars.  If you visit during Christmas or Easter, the square hosts medieval style markets.

Church of Our Lady before Tyn 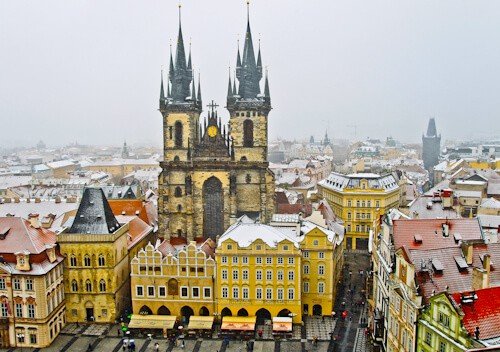 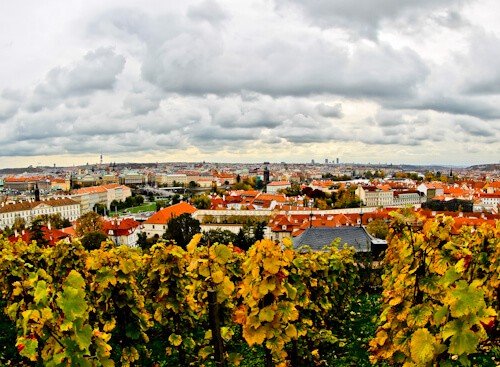 Petrin Lookout Tower is located close to Prague Castle.  If I had to describe the Petrin Lookout Tower I would describe it as an ugly version of the Eiffel Tower.  The design of the Petrin Tower was inspired by the famous Tower in Paris.  Having said how it’s not so beautiful it does give you a beautiful panoramic of the UNESCO historic city of Prague and Castle Complex.  Built in 1891 the tower took 4 months to make and is 63 meters tall.  To reach the observation deck it’s a 299 stair climb. 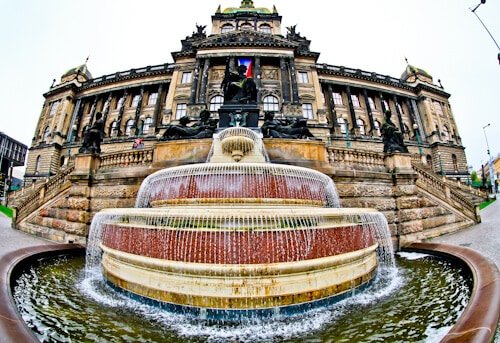 Around Wenceslas Square you can find the National Museum Building (above) as well as lots of hotels, shops and restaurants.  If you photograph the building from further down the street you can use a pond down there to get a reflection shot.  Behind the building is the end of the UNESCO historic city of Prague and hotels start to get cheaper.  Wenceslas Square is also the home of one of the major metro stations of Prague so you will probably arrive here if you are staying away from the center. 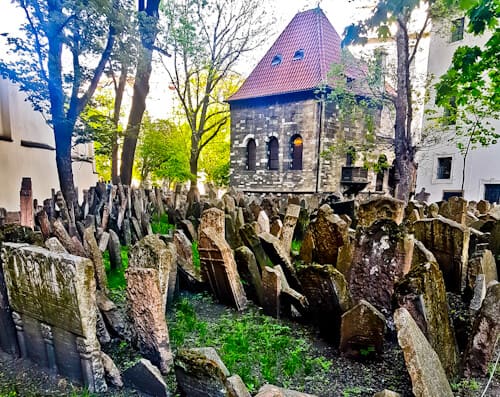 The old Jewish cemetery in Prague is one of the largest in Europe.  It has gravestones from the 16th to 18th centuries.  Due to the significance of this cemetery, there are gravestones of highly regarded members of the Jewish society including rabbis etc.

Things to do in Prague – Lennon Wall

The John Lennon Wall is a must see for Beatles fans, since the early 80’s this normal wall became graffitied.  It wasn’t the normal type of graffiti but pictures of John Lennon as well as his lyrics and Beatles lyrics.  The wall even caused riots in 1988 when students rebelled against the communist regime, Lennonism was blamed.  Nowadays, as well as being Lennon wall it is also an anti war wall.

For Beatles fans reading, I recommend my article on a hotel in Liverpool where you can find the Mona Lennon painting in reception. 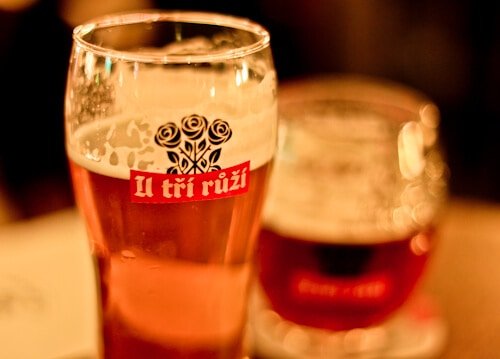 Prague is one of the cheapest places in Europe to drink beer.  Around the historic center you’ll find countless bars which all sell low priced Czech beer.  I definitely recommend planning a night out and taking advantage of the cheap beer, just make sure you don’t schedule anything for the morning after. 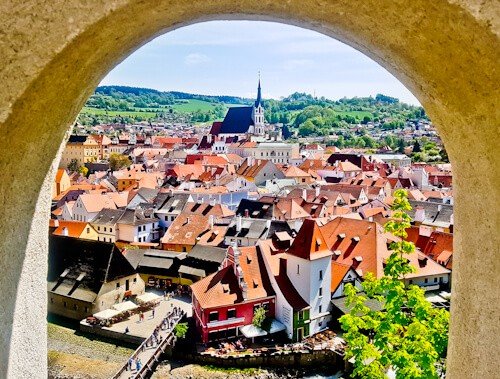 With all the things to do in Prague, it’s hard to find a reason to leave!  Cesky Krumlov is a small town located a 2-3 hour drive from Prague.  The major point of interest is the UNESCO listed castle.  The historic and picturesque town also justifies a day trip from Prague.  You don’t need to go to the top of the belltower for panoramic views over the city.  In fact, you’ll get an Instagrammable city shot from the castle walls (above).

How to get from Prague to Vienna by bus 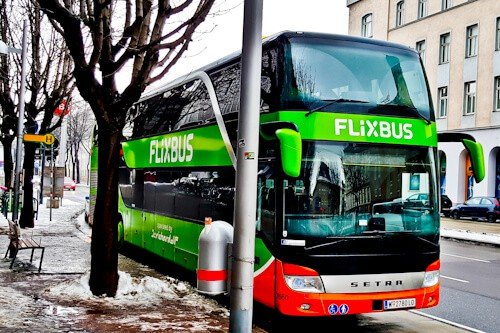 The Flixbus to Prague is a lot cheaper than taking the train.  The journey takes around 4 hours and you should be able to find a ticket for $20-$30.  On the Flixbus service you have your own power socket to charge your phone or computer and free WiFi so the journey passes quickly.  You could always look out the window and enjoy the beautiful countryside of Czech Republic and Austria.  Vienna in German is Wien so don’t stand next to your bus waiting when it’s already there!

How to get from Prague to Vienna by Train