Tehran is the capital city of Iran and it’s huge.  I’ve picked a few of the top things to do when you visit Tehran Iran:

Tehran is a spread out city so choose your hotel location carefully.  You’ll probably have to take a combination of taxi and metro to visit the Tehran attractions photographed below. 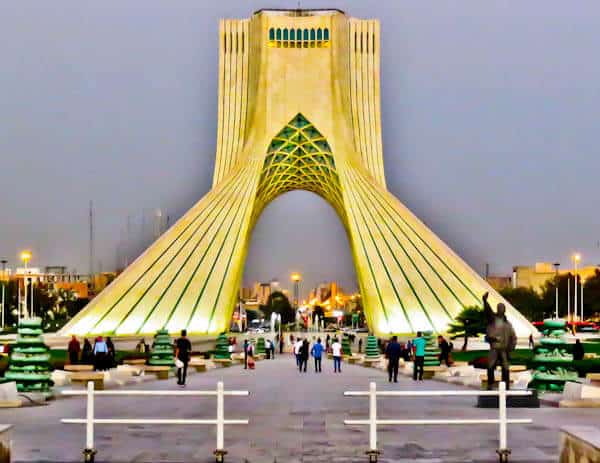 When you see a picture of Tehran on the news it’s often of the Freedom Tower.  This monument is a symbol of Tehran like the Eiffel Tower is to Paris.  It’s made of 100% marble and was built under the rule of Iran’s last emperor.  What a lot of people don’t realize is there’s a huge underground museum complex beneath it.  Alternatively, why not ascend 45 meters to the panoramic viewing platform. 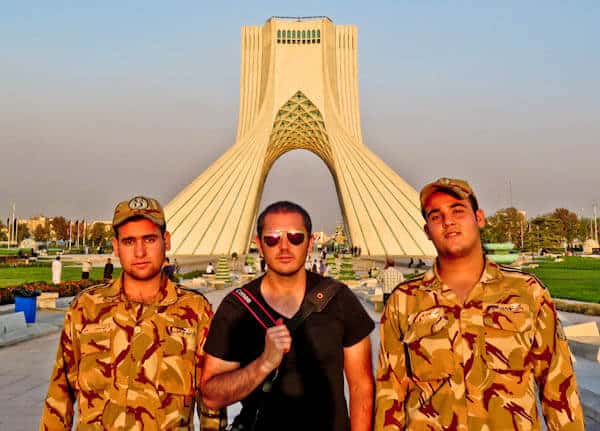 As I explore Azadi Square which encircles the monument I noticed a lot of police as well as Iranian soldiers.  These soldiers were in fact off duty and more than happy to pose for pictures with me.  Additionally, the police were also happy to pose for photos with me.  Of course, they were friendly and welcomed me to Iran.

Former US Embassy – Den of Espionage 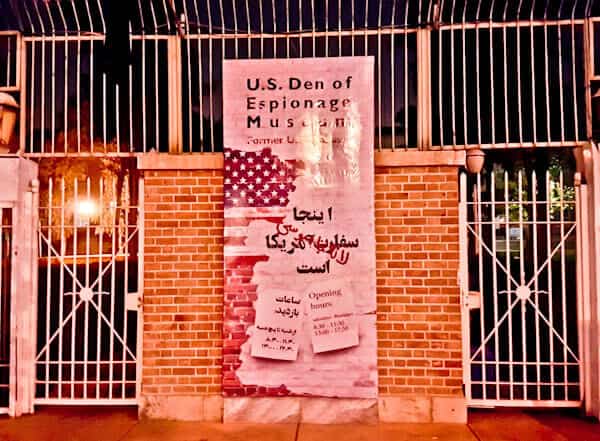 The US Embassy in Tehran Iran was infamously captured in 1979.  Us Embassy workers were then held hostage for over a year.  The movie Argo is about this event.  What it does not tell you however is that the embassy is now a museum called the US Den of Espionage Museum.  The museum shows evidence that the US was spying on them during this period.  Finally, did you know there’s also captured US Warship in Pyongyang, North Korea which tells a similar story of espionage.

Down With USA Art 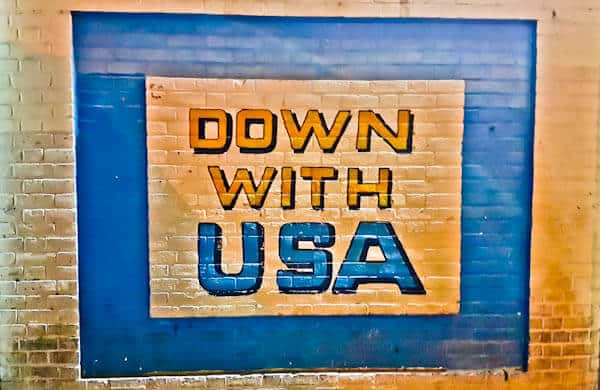 If you watch CNN or BBC they often show pictures of ‘Down with USA’ artwork.  This is in fact outside the former US Embassy. 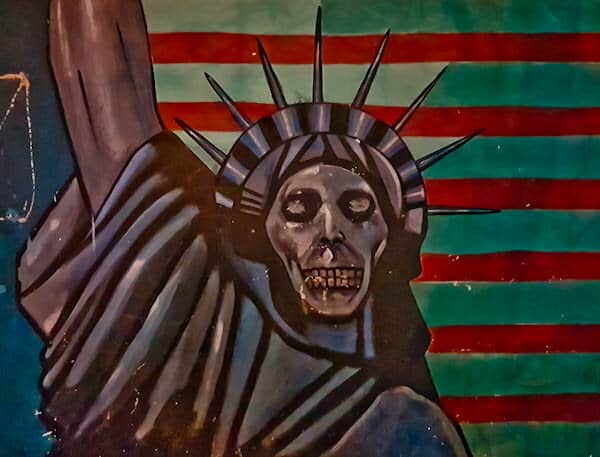 The ‘Down with USA’ Statue of Liberty is also on display outside the former US Embassy in Tehran.

Vegetarian Restaurant near the Former US Embassy 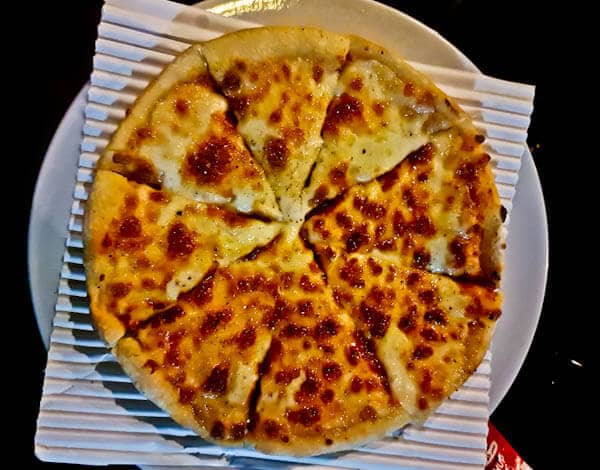 After exploring the former den of US espionage you may be feeling a little hungry.  Why not try the Iranian Artist Forum Veggie Restaurant which has excellent service and is surrounded by gardens.  A vegetarian meal can also make a nice alternative to the typical Iranian kebab you’ll be getting accustomed to.  It’s located here behind the former US Embassy. 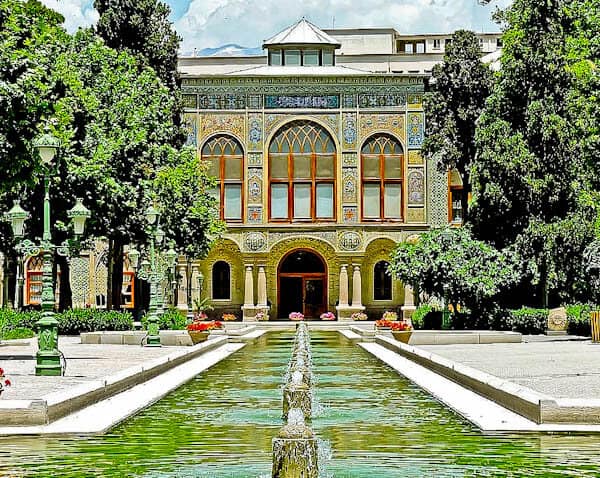 Golestan Palace is the only UNESCO site in Tehran.  What’s more, it’s one of the oldest and most beautiful buildings in the Iranian capital.  Built during the rule of Qajar kings it features an endless number of elaborately decorated rooms.  Believe me, no expense was spared in the creation of Golestan Palace at the start of the 19th century.  Instagrammers? simply put, you must plan a few hours at Golestan Palace where you can create thousands of stunning pictures. 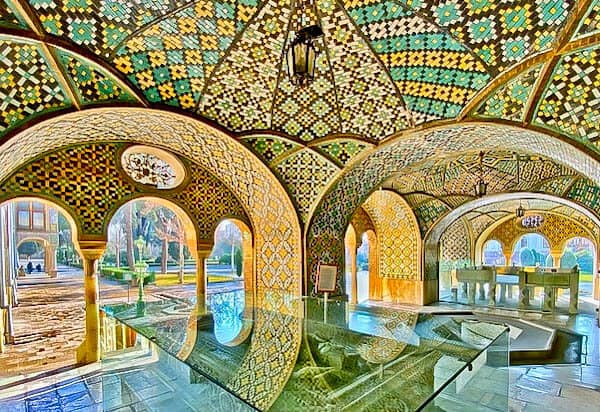 Karim Khani Nook is the top Instagram spot in Tehran.  Moreover, with very few tourists it’s highly likely you’ll have it all to yourself.  Why not buy yourself some colorful Iranian scarves from Tehran Bazaar beforehand to pose in in front of the colorful walls. 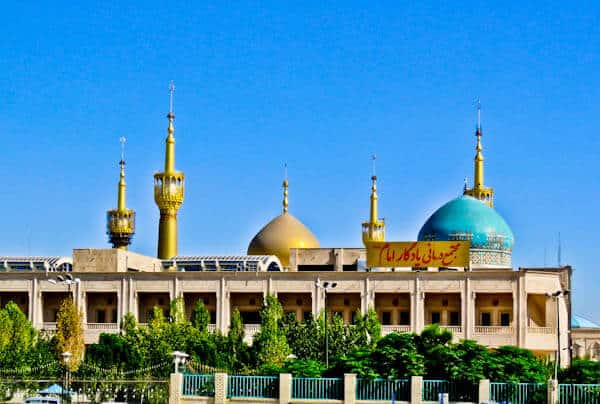 1979 was the beginning of the Islamic Revolution in Iran.  During this revolution, the Pahlavi dynasty was overthrown and Ayatollah Ruhollah Khomeini became supreme leader.  After his death in 1983, he was succeeded by Ayatollah Ali Khamenei who was supreme leader when I visited in 2019.  Back to the point of interest, the Mausoleum of Ruhollah Khomeini is the final resting place of the first supreme leader of Iran.  If you arrive at Tehran airport you’ll pass this holy shrine as you head towards the city center. 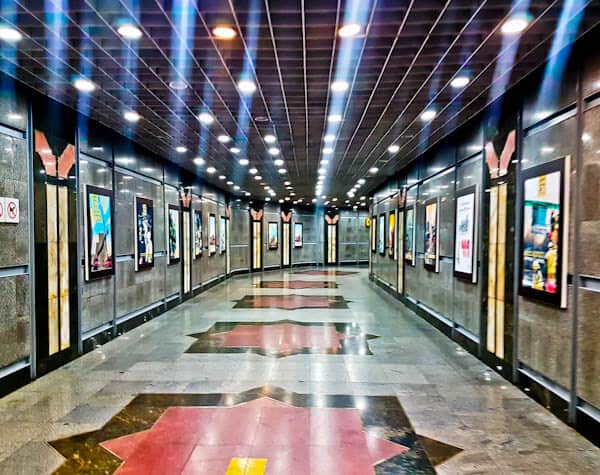 There are six lines of the Tehran Metro.  What’s more, it’s the cheapest city metro system in the world.  Each journey will cost you only a few cents.  Lastly, the station architecture isn’t too bad either! 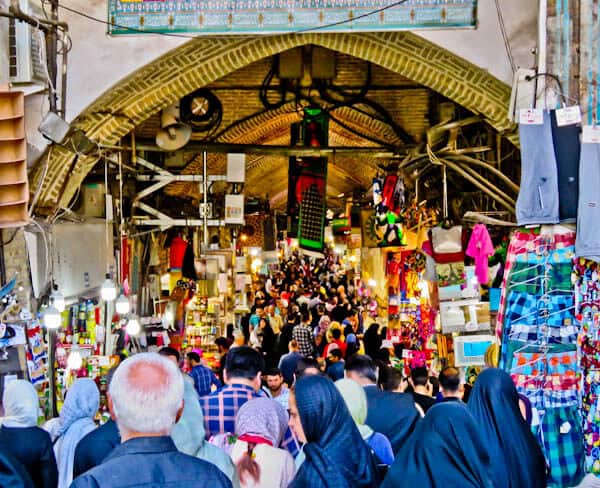 Tehran Bazaar is huge.  As a matter of fact, it’s like a city in itself.  As well as over 10 km of corridors, you’ll find hotels, mosques and 2 metro stations.  Consequently, it’s not only a shoppers but also a photographers dream. 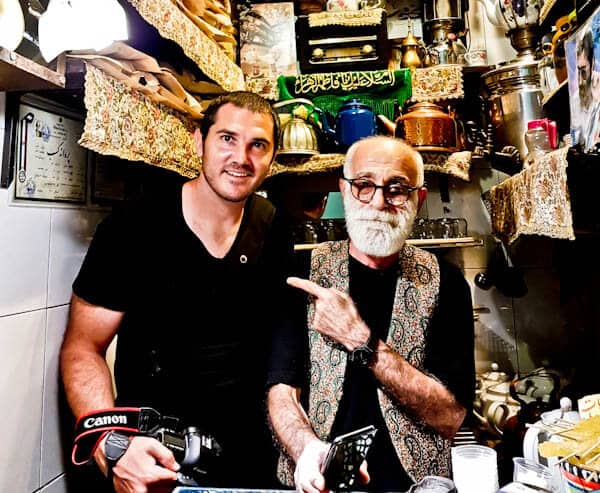 Haj Ali Darvish Teahouse claims to be the smallest tea house in Iran.  He gives tea to his clients and any money they donate is used to help the local community.  Additionally, he’ll take his photo with you and post it on his Instagram page.  Using this method he’s amassed quite a following.  Maybe he’s finally answered the question; ‘how do I grow my Instagram following?’. 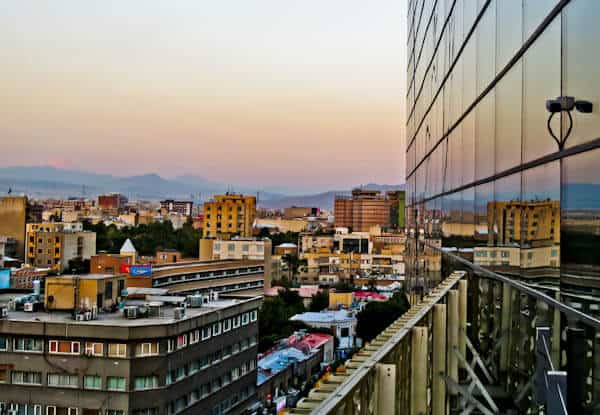 Goldis Tower is a shopping mall in the center of Tehran.  On the 3rd floor is a food court and also a viewing platform.  Did you know Tehran was surrounded by mountains?  Visit the Goldis Tower and take a look whilst you enjoy some good Iranian food. 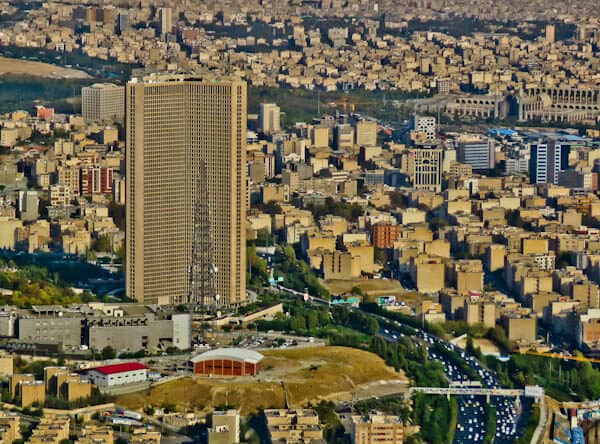 What is the tallest skyscraper in Tehran Iran?  The 162 meter tall Tehran International Tower.  It is however, a residential building therefore you can’t visit unless you know someone.  The place to go for panoramic Tehran views is the Milad Tower. 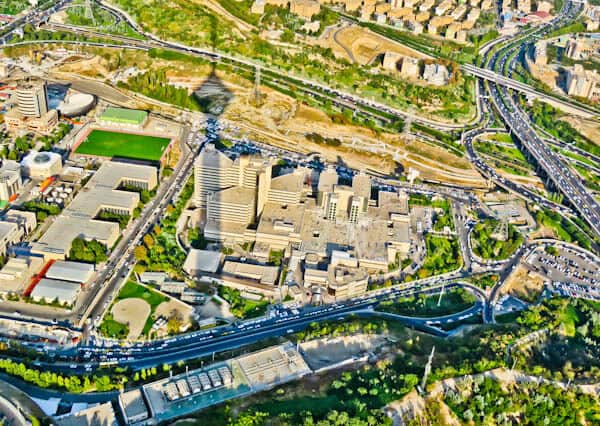 What is the tallest tower in Tehran?  At 435 meters, it’s the Milad Tower.  Moreover, it’s also the sixth tallest tower in the world and the tallest in the middle east.  For those looking for a luxury stay in Tehran, Milad Tower also features a five star hotel.  If you venture to the top there is an outdoor viewing deck as well as a revolving restaurant. 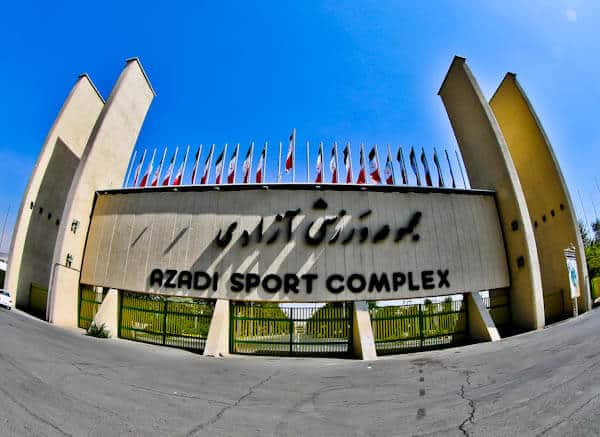 The 78,000 capacity Azadi Stadium is home to both Esteghlal and Persepolis football clubs as well as the Iran national team.  Football is a very popular sport in Iran and it’s not unusual that this stadium which is bigger than Old Trafford and Anfield sells out.  Additionally, Frank Sinatra famously performed here in 1975.  You won’t be allowed into the stadium unless a game is on so don’t visit and expect a stadium tour. 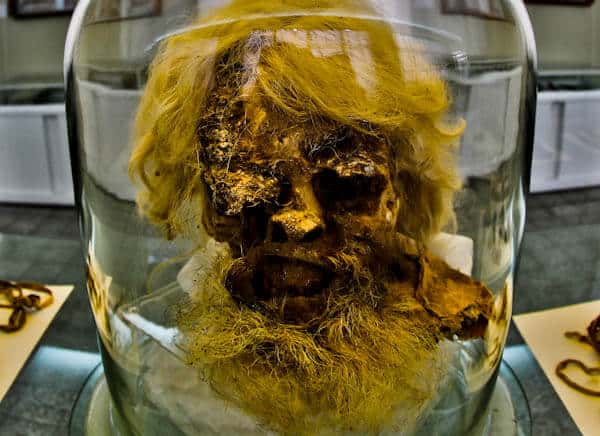 Once upon a time a salt mine collapsed in nearby Zanjan.  Several miners were killed during this collapse and their bodies were preserved in the salt.  Some salt men heads are on display inside glass bottles in the National Museum of Tehran.  In addition to the salt men, you’ll also learn about the history of Persia and can view original artifacts from Persepolis. 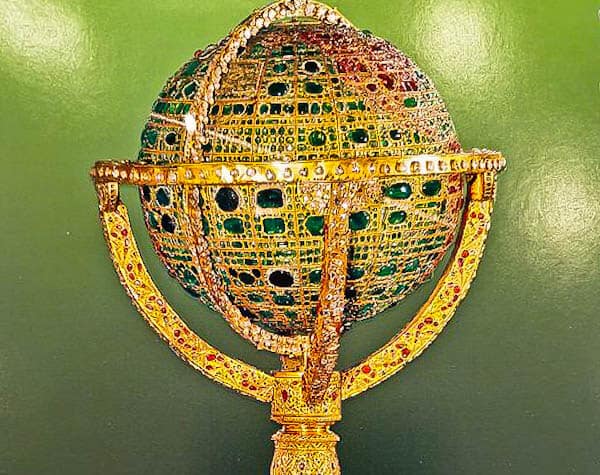 Firstly, I must say this is the most impressive collection of treasure I’ve seen anywhere in the world.  It makes the Crown Jewels in London look like a handful of copper coins.  For me, the Globe of Jewels was the most impressive treasure piece.  As a matter of fact, the ocean on this globe is made from emeralds.  Moreover, as you explore more of the treasures you’ll discover some of the largest cut diamonds in the world.  Lastly, there is strict airport type security and a no camera / bags policy at the National Treasury of Jewels.  For this reason, don’t expect to take any pictures.  However, there are free and secure lockers to store your items.  If you want pictures of the treasures you must buy a book (or take a picture of a book). 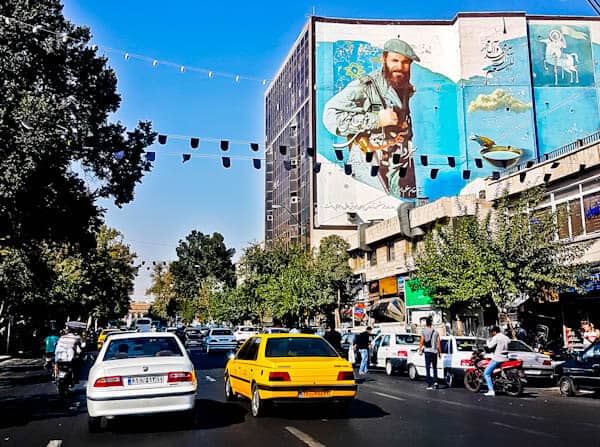 As you would imagine, street art in Iran is strictly controlled by the government.  None the less, there is some out there so keep your eyes open as you explore Tehran.  There is in fact a famous building which features ‘Death to America’ street art. 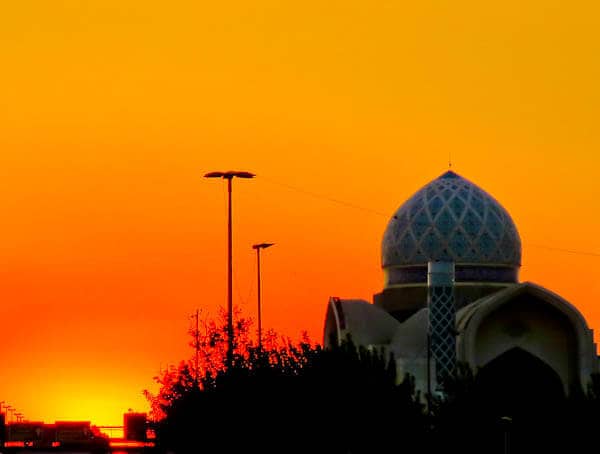 So where are the best sunset locations in Tehran Iran?  I found either the Freedom Tower or Milad Tower react well to the low light.  I didn’t visit Golestan Palace at sunset but I’d expect Karim Khani Nook to magically illuminate at sunset. 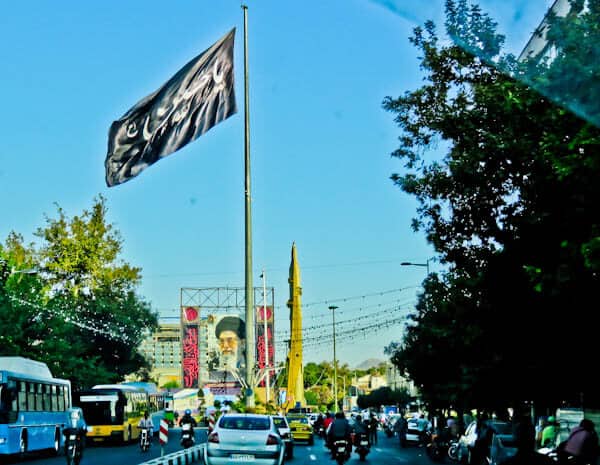 As you venture the streets of Tehran there are thousands of events to capture.  Be it a local man crossing the street or an old woman dressed in traditional clothes stood in a doorway.  There’s even a missile in the middle of the street which you may drive past.  Keep your eyes and your imagination open! 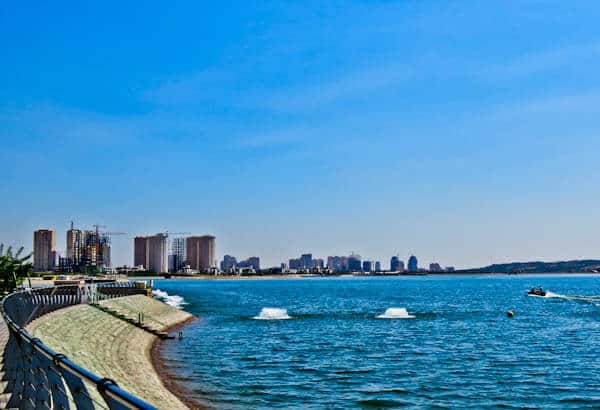 Did you know Tehran has a huge man made lake surrounded by a beautiful park with a mountain backdrop?  Escape the city for a few hours and go for a wander around Chitgar Lake. 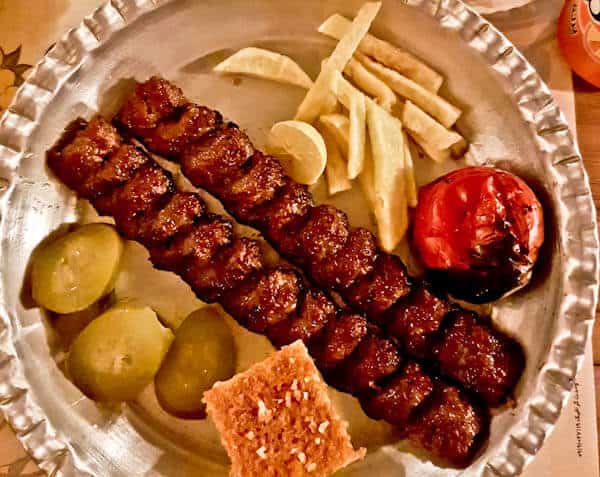 I mentioned earlier the vegetarian restaurant behind the former US Embassy.  But what about other food options?  I don’t need to describe the kebab but the rice it comes with may be something new for you.  It is in fact tahdig which is Persian crispy rice.  The slightly browned rice comes from the bottom of the cooking pot and the Iranians love it.  How do you make the Iranian kebab meal more exciting?  Try eating it in a caravanserai restaurant.

How to Travel from Tehran to Isfahan 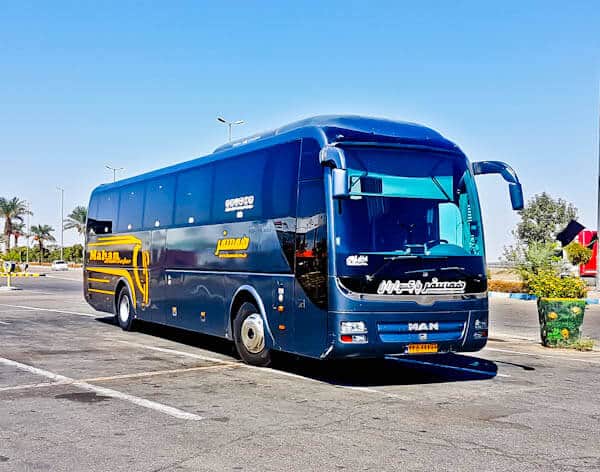 There are regular bus services from Tehran to Esfahan.  It takes 5-6 hours and it’s a 400 km journey.  These luxury buses offer your own personal TV in Persian as well as Persian music channels.  Enjoy the scenery between Tehran and Esfahan.