Things to do in Valletta, Malta + Original Photos

I stayed at the Valletta Hotels – Saint John which is within walking distance of all the things to do in Valletta.  However, as Valletta is the smallest capital in the EU, you could choose whichever Valletta hotel suits your budget. 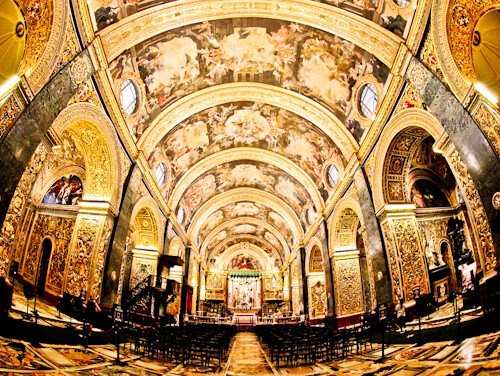 From the exterior St John’s Co-Cathedral is an impressive example of Baroque architecture.  In fact, the interior of St John’s Co-Cathedral reminded me of the Sistine Chapel in Vatican City.  However, there was one huge difference to my experience in the St John’s which was that there were very few people.  I recommend visiting at around 9 am as it’s quiet at this time.  Moreover, the entrance fee is 10 Euros.  The reason you must pay to enter this cathedral is to contribute to the maintenance of it and it’s in pristine condition.

Make sure you don’t miss the most famous piece of artwork in the cathedral which is ‘The Beheading of Saint John the Baptist’ by Caravaggio.

Casa Rocca Piccola – Things to do in Valletta

The Casa Rocca Piccola is a well maintained 16th century palace.  Originally, it was the home of the noble De Piro family.  Today, you can take a tour of their house and it’s open from Monday to Saturday.  In 1918 and again in the second world war huge air raid shelters were added under the building.  For this reason, you can visit these huge underground bunkers as part of your tour of the palace. 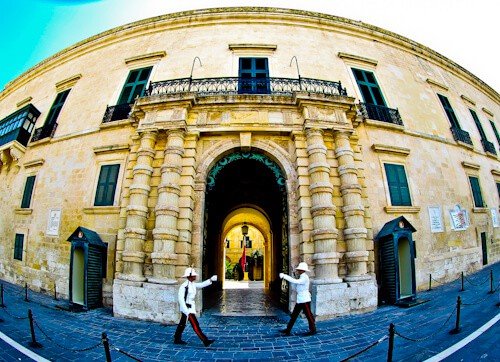 Located in the Grandmasters Palace is the Palace Armoury which was built in the 17th century.  The collection of arms and armoury is one of the largest collections in the world which is still located in its original location.  If you do not wish to go inside you can appreciate the building from the huge St George’s Square in front of it.  I recommend you relax in one of the restaurants in this square and enjoy a coffee or a cold beer.  Periodically, the guards march in front of the building. 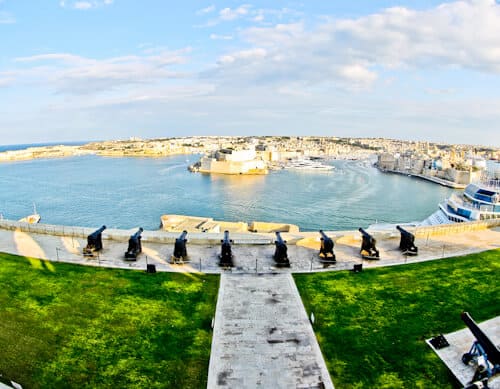 The Saluting Battery was mainly used for gun salutes but during the second world war it was used for military purposes.  These days, the guns are fired daily both at midday and at 4 pm.  A short walk from the saluting battery is the cruise ship terminal of Valletta Malta.  In fact, the cruise ship docks virtually in front of it therefore the Saluting Battery is one of the first things to do in Valletta for cruise ship passengers.

Located below the saluting battery and the upper Barrakka gardens are the Lascaris war rooms.  In the 1940’s the British made a secret underground in Valletta.  During the second world war over 1000 people worked in the secret underground.  Strategic operations were planned here such as the invasion of Sicily.  The rooms were used during the Suez crisis and cold war.  Today however, the Lascaris war rooms are no longer used for military purposes. 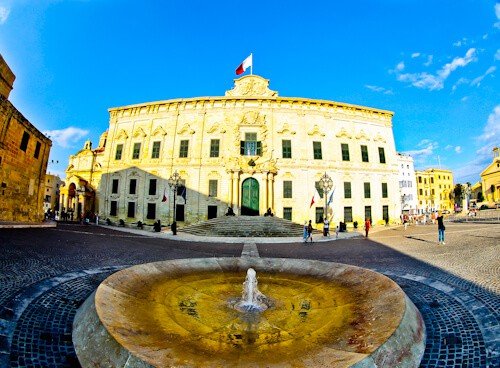 The office of the Prime Minister of Malta is located in the Auberge de Castille.  For this reason, Auberge de Castille is to Valletta what 10 Downing St is to the London Landmarks.  An interesting fact is that this Baroque style building is located at the highest point of Valletta.  Furthermore, adjacent to the Auberge is the Stock Exchange of Malta.  Around the corner you’ll find the Valletta city gates which were undergoing a huge makeover when I visited.  However, they should be completed when you visit. 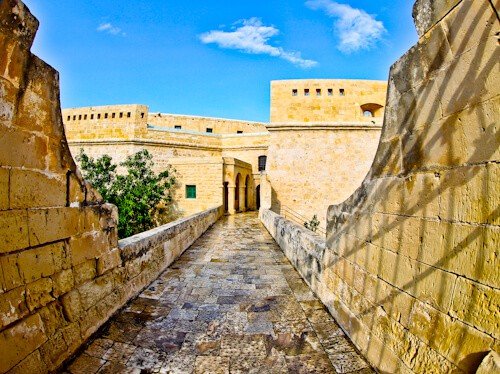 You are spoilt for choice when it comes to museums in Valletta.  The most important museum you must visit in Valletta is the national war museum (above).  In the war museum you’ll learn how important the strategically placed Malta was during the world wars.  Without Malta, could the allies have won World War II?  You decide during your visit.  The war museum is located in Fort St Elmo at the end of the peninsula.  Additionally, the following are also notable museums in Valletta;

Finally, the Toy Museum might be of interest if you’re traveling to Valletta with kids. 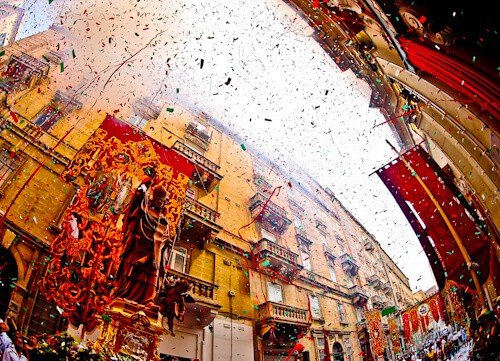 As you walk from the Sliema ferry terminal to the center of Valletta you may pass St. Augustine Church.  If you pass on a Sunday you could be in for a treat.  There are fireworks and the scene looks like it could be part of a movie. 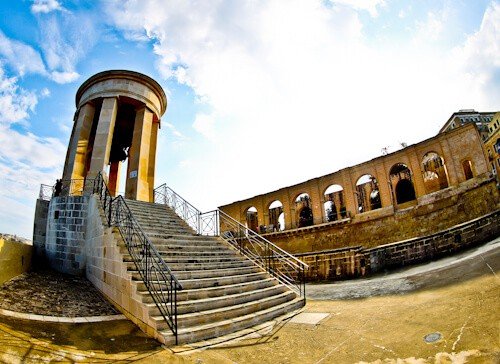 The Siege Bell war memorial was built in 1992 to commemorate the allied forces victory during World War II.  In actual fact, it commemorates the victory of the second siege of Malta from 1940-43.  The largest single bell in Malta is located inside the belfry.  Adjacent to the Siege Bell are the lower barrakka gardens which offer an incredible view of the Grand Harbor. 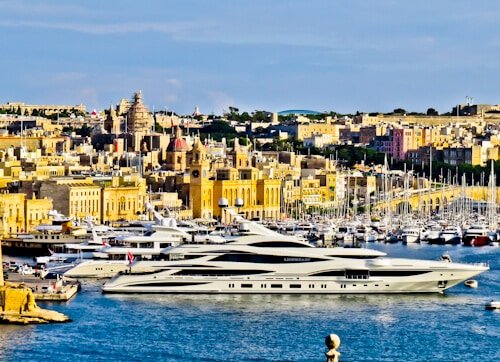 The views over the Grand Harbor from Valletta are stunning.  I found the best place to view the harbor from was the upper barrakka gardens.  Moreover, if you’re arriving on a cruise ship you’ll get a good view from there too.  Many movies have been filmed at the Grand Harbor.  Movies including Troy, Gladiator, Game of Thrones, Black Eagle, Munich, The Da Vinci Code, Captain Phillips and World War Z.  As a result, this is an iconic filming location. 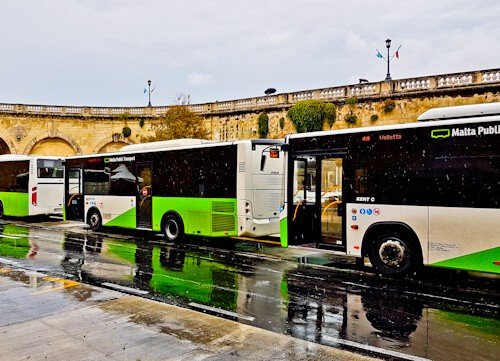 Independent travel around Malta is very easy.  Outside of the city gates is the Valletta bus station.  From Valletta bus station, you can take the local bus service to anywhere on the Island as far as the Gozo ferry port.  As a matter of fact there are over 2000 bus stops throughout the Islands of Malta and Gozo.  The cost of a ticket is €2 and the tickets can be used on any bus within 2 hours.  Furthermore, if you plan on using the service often then you can buy a 7 day pass for €21.  If the local bus sounds too complicated then there is also a Hop On Hop Off bus service around Malta and Gozo as well as organised tours. 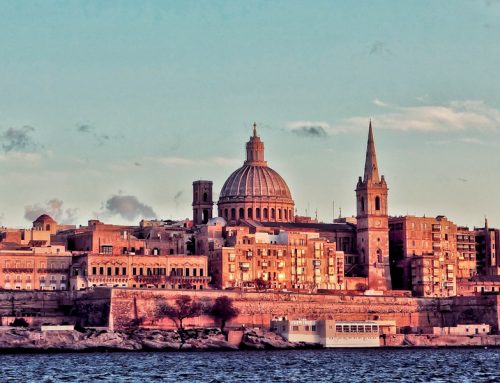