Best Things to do in Tomar Portugal + Photography

Tomar is a small Portuguese town with a lot to see.  Here are a few things to do in Tomar Portugal;

Hotels in Tomar are excellent value, in fact, it’s one of the best value towns in Portugal. 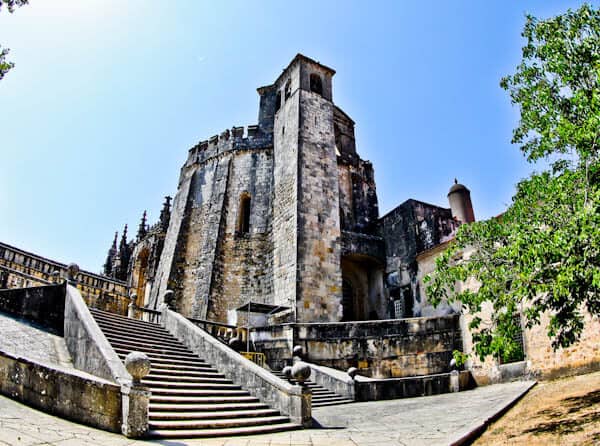 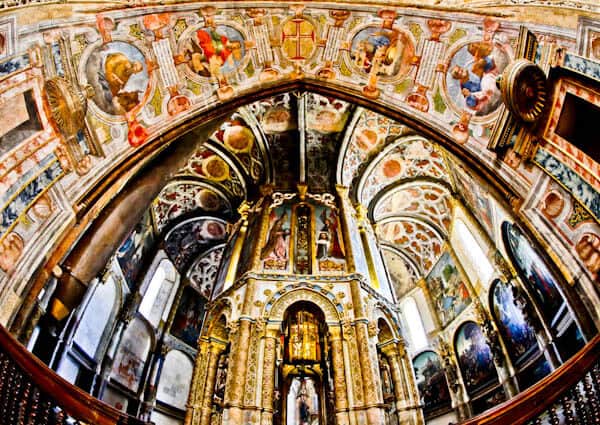 Simply put, you must visit the interior of the Templars Castle.  As well as admiring detailed artwork and icons, you can also admire azulejos and cloisters. 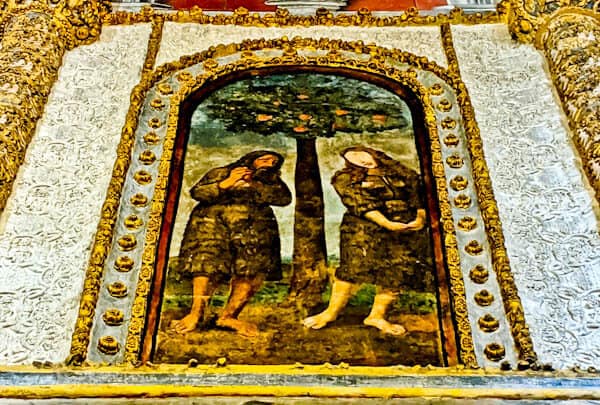 The Knights Templars were fighting in the religious wars of Medieval times.  For this reason, the interior of their headquarters is decorated with Christian inspired artwork.  I’ve shared a picture of Adam and Eve but there are hundreds to admire in the castle.  As you would imagine, much of the artwork is inspired by bible stories from Jerusalem.  Moreover, parts of the design are inspired by both the Dome of the Rock and the Church of the Holy Sepulchre.

Convent of Christ – Dormitory of the Monks 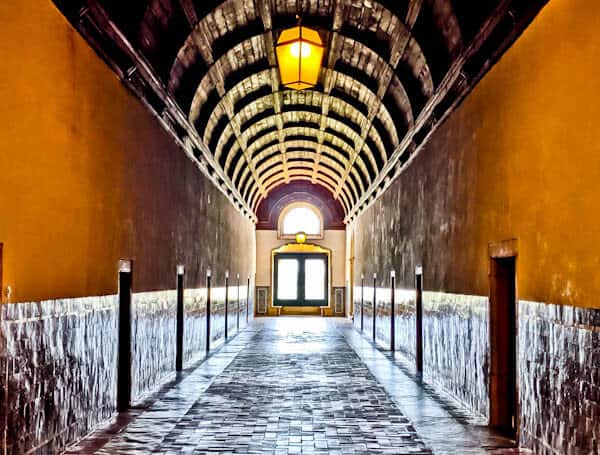 A walk through the dormitories and refectory transfers you to another era.

Window of the Chapter House 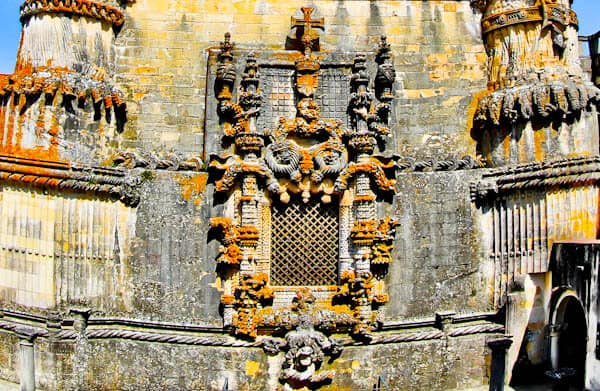 The Chapter House window was added at the start of the 16th century.  It was designed by Diogo de Arruda.  For me, it’s one of the most spectacular parts of the castle. 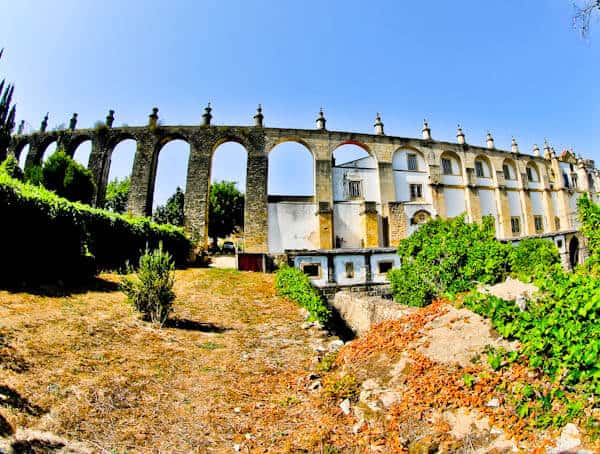 At the beginning of the 17th century a 6km long aqueduct was added to the complex.  It’s during this period that Spain and Portugal were a united country. 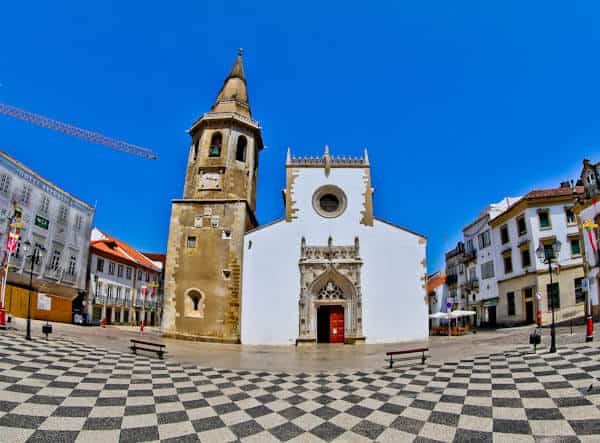 Tomar Church is very interesting because it’s a rare example of Manueline architecture.  What is Manueline architecture?  It’s architecture created under the rule of former Portuguese King Manuel I.  Moreover, the bell tower is known as the Manueline Clock Tower and features a 16th century clock.  Finally the church is devoted to Saint John the Baptist.  Did you know you can see the hand of Saint John in Cetinje, Montenegro? 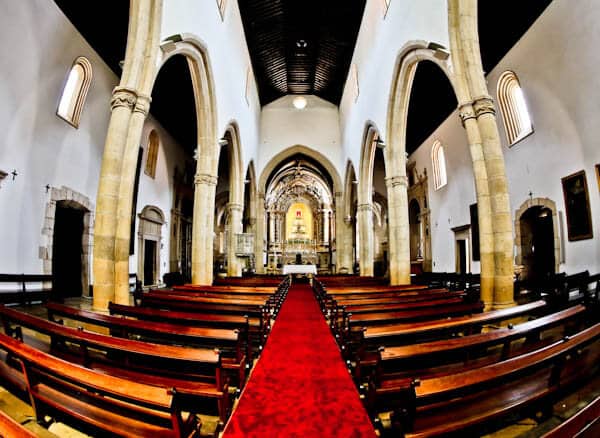 If the Saint John the Baptist Church is open, do go inside.  You’re welcome to take photos as well as admire the architecture but respect the locals.  Additionally, if you’re on the Camino Portuguese this is a good place to get a stamp. 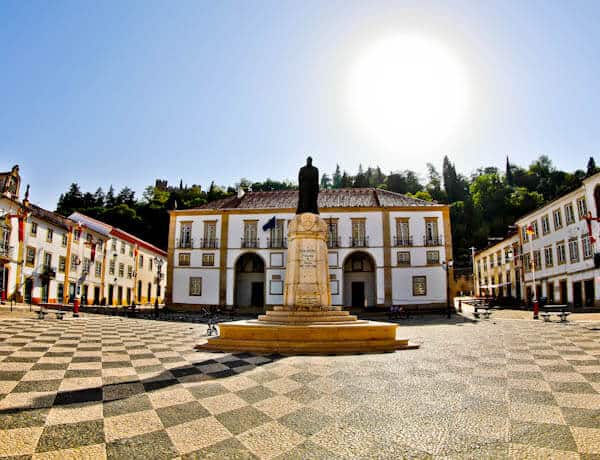 Republic Square is the main square of Tomar.  It’s surrounded by cafes as well as the town hall and church.  As a result, it’s a good place to people watch in Tomar.  Finally, the statue in the center is Gualdim Pais, founder of Tomar. 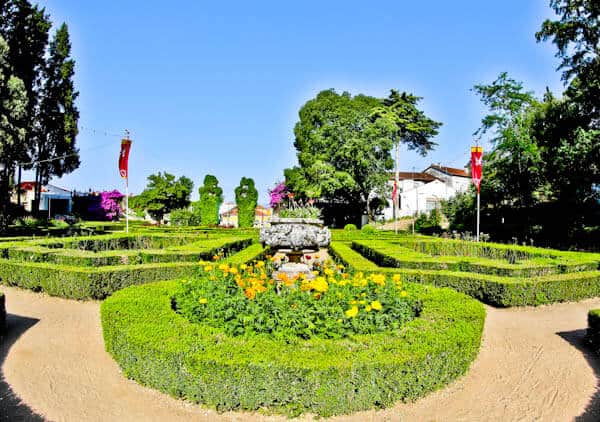 If you wish to explore gardens in Tomar then I recommend the National Forest of Seven Hills.  It’s an interesting stop with very well maintained gardens.  At the entrance to the gardens is a statue of Henry the Navigator, a key player in the Portuguese Age of Discovery.  Did you know Tomar Portugal is also known as the town of seven hills.  This enforces its religious importance and stands it alongside both Rome and Jerusalem which are also cities of seven hills. 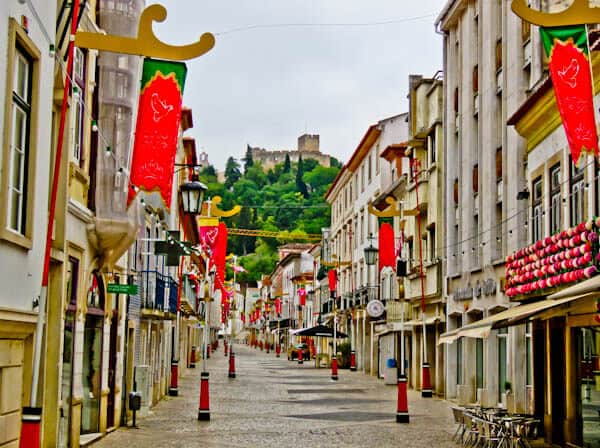 Rua Serpa Pinto is the main pedestrian street of Tomar.  Around this area you’ll find lots of shops, cafes, bars, hotels and restaurants.  In addition, there are wonderful views of the Templars Castle looking over the city. 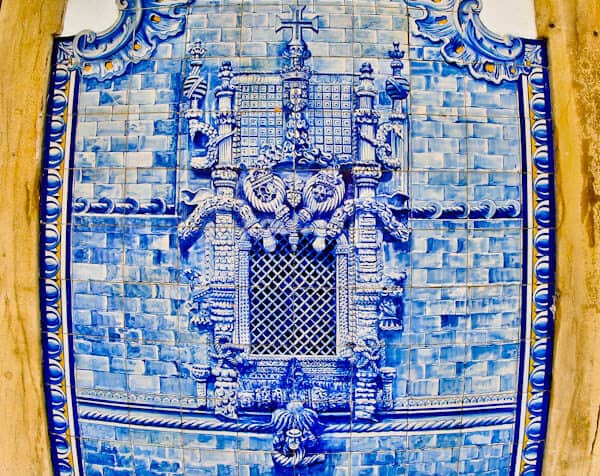 You cannot mention Portuguese culture without the famous azulejo tiles.  Tomar has many examples of creative azulejos.  As a matter of fact, you’ll find a Window of the Chapter House design along Rua Serpa Pinto. 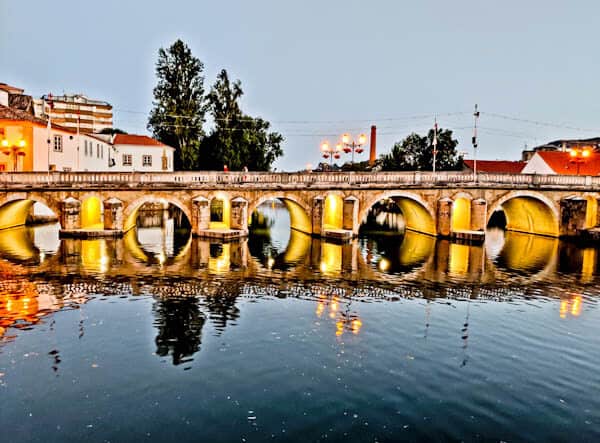 The Old Bridge of Tomar is an extension of Rua Serpa Pinto and connects the new town with the old.  This could be the first bridge to ever cross the Nabao River.  The Old Bridge photographs beautifully at sunset and blue hour when the old fashioned lamps are illuminated.  Furthermore, on a calm day it reflects wonderfully into the river. 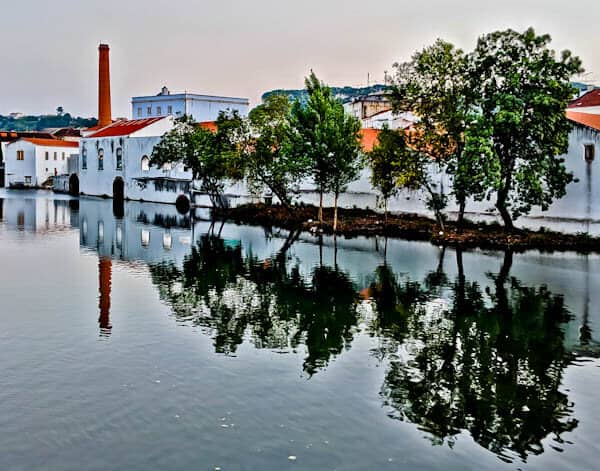 The Levada de Tomar museum is a restored mill.  Here you can discover Tomar from a different period in history. 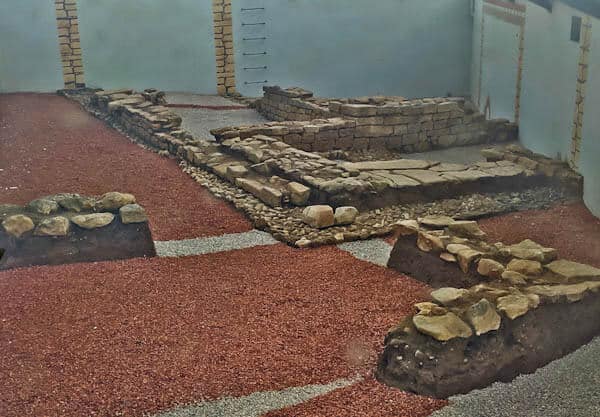 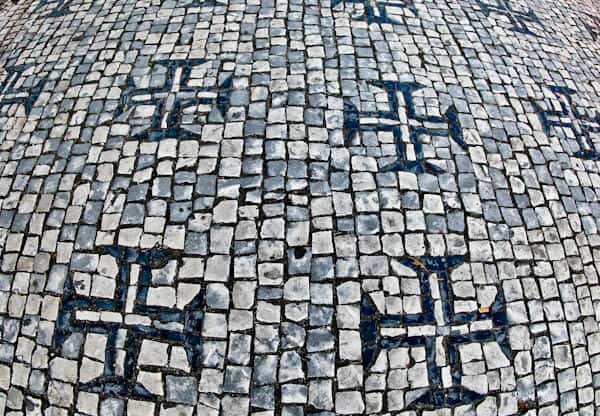 Of course, Tomar is a town full of traditional Portuguese pavements.  However, in Tomar a Knights Templar cross has been added to enhance your experience in the city. 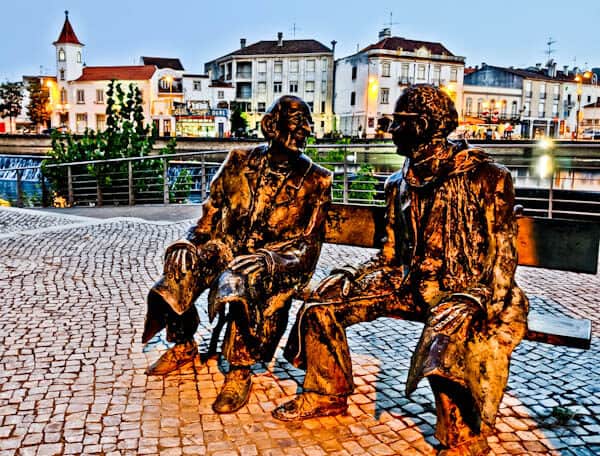 Firstly, Mouchao Park features its own Water Wheel which entices you into the park.  Once, in the park, as well as shade from the sun there are several water features and a bridge.  If you need a cold drink, there’s also a popular restaurant in the center of the park. 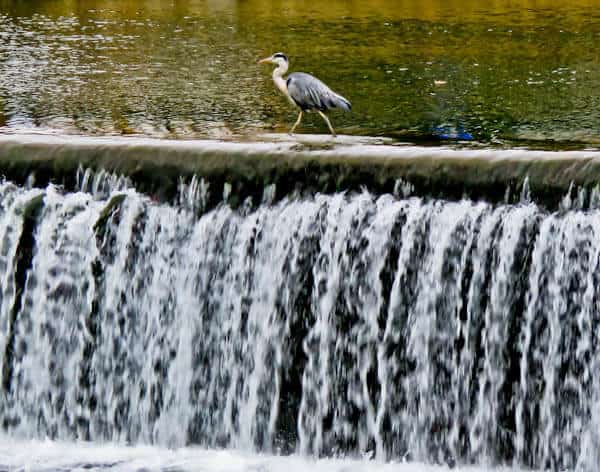 As you stroll through Mouchao Park you’re guaranteed to see wildlife.  A popular area for birds is the Nabao River adjacent to the park. 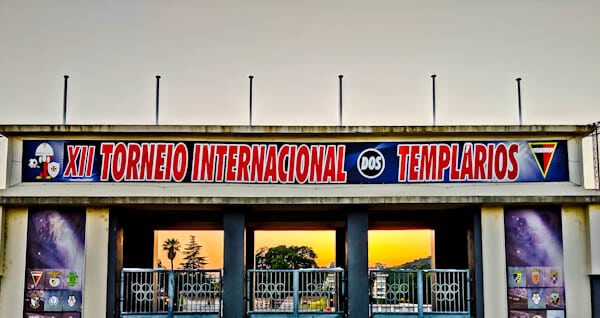 Uniao de Tomar used to play in the top tier of Portuguese football.  As a matter of fact, top Portuguese teams such as Benfica, Sporting Lisbon and FC Porto have played here.  Today however, they’re a lower tier team playing unknown opposition.  If you’re interested in a Portuguese football match, check the fixture list when you visit Tomar Portugal.

Tomar Portugal in the Rain 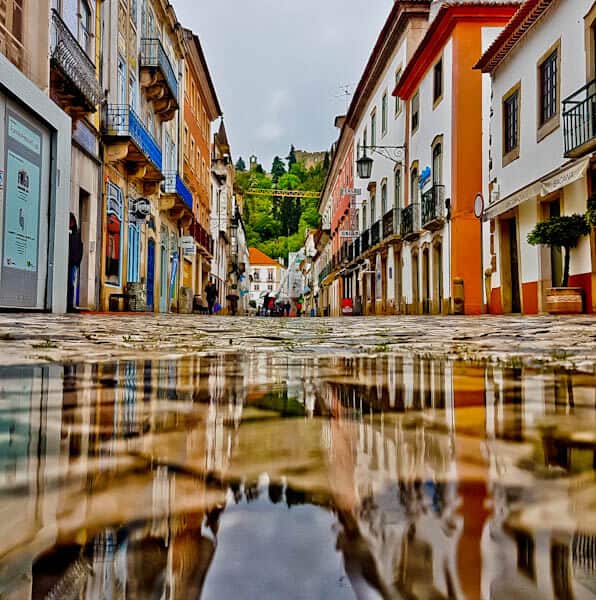 If it’s raining when you visit Tomar, don’t be disappointed.  As well as cooler weather, the streets are often deserted and full of puddles.  Photographers can take advantage of these conditions and make some spectacular shots. 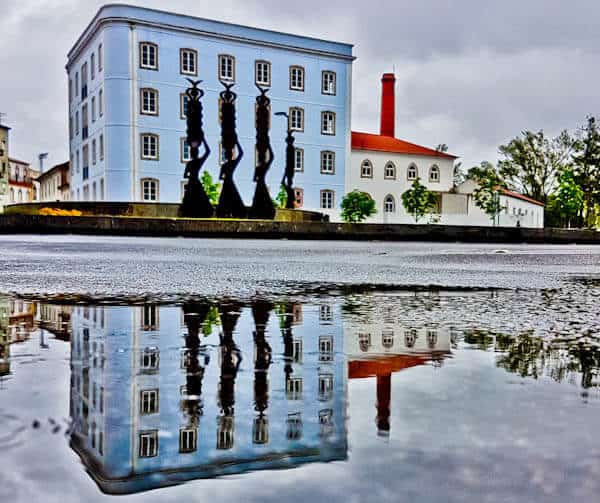 One building in particular that demands your attention is a blue government office building.  It’s adjacent to the Levada de Tomar Museum on a curved street.  Additionally, there’s also a traffic circle in front of the building.  As a result, photographers can get very creative here. 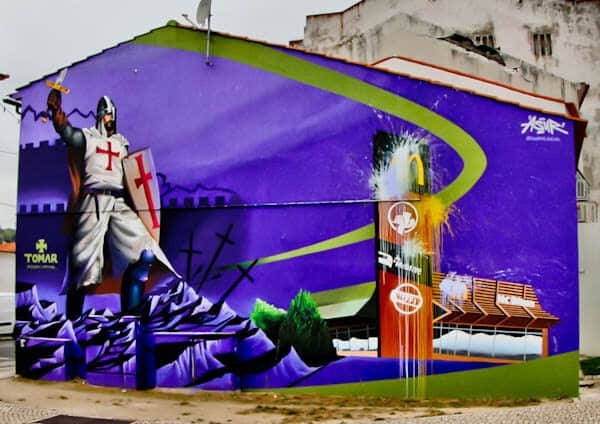 Tourists come from around the world to see this historic Knights Templar town.  As a result, the city is full of Knights Templar street art, merchandise and even Templar inspired wine. 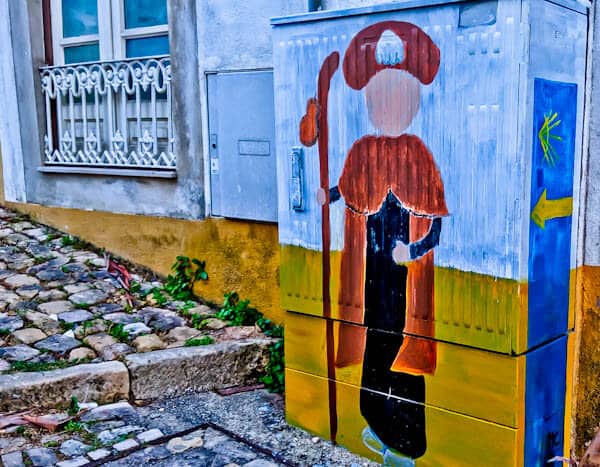 Tomar Portugal is part of the Camino Portuguese route from Lisbon to Santiago de Compostela.  For this reason, you’ll see many camino shell signs and yellow arrows throughout the city.  In addition, there is Camino Portuguese inspired street art. 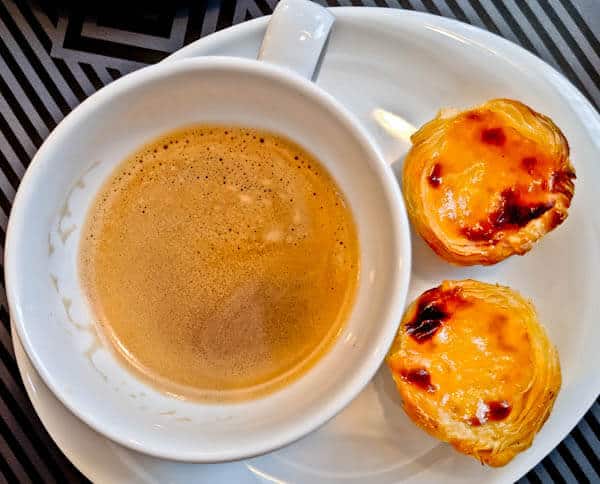 The Pastel de Nata or Portuguese custard tart are the famous sweet available throughout the country.  In fact, you will definitely find the best in a factory which they have in both Lisbon and Porto.  Nevertheless, there is one place worth mentioning in Tomar which offers free natas.  All guests at Thomar Boutique Hotel are welcome to enjoy complimentary natas and port throughout the day, 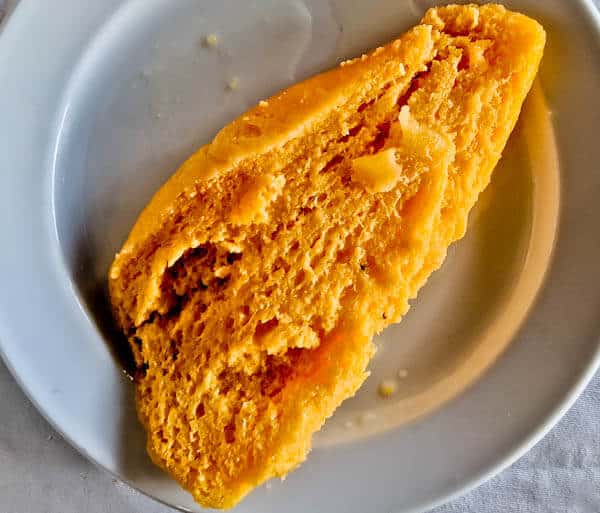 Tomar Portugal is home to the huge plates of traditional Portuguese food which you can enjoy all over the country.  However, there is one dessert which is unique to Tomar.  This is known as Fatias de Tomar, or Slices of Tomar.  So what are Fatias de Tomar?  They are a mix of egg yolks, butter, water, sugar, lemon and cinnamon.  Enjoy. 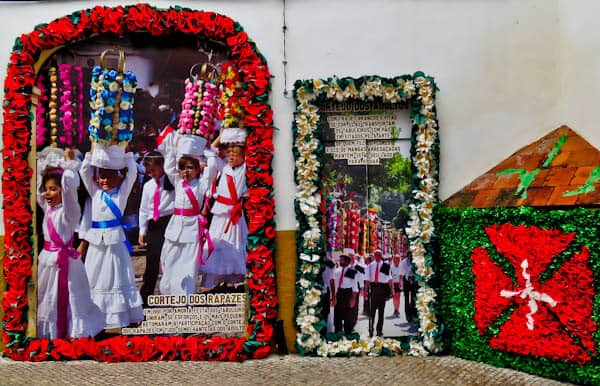 Do you like festivals and lots of action?  Do you like flowers and religious decorations?  If yes, then you must coincide your visit to Tomar with the Trays’ Festival.  Not only is the whole city colorfully decorated but people also participate in parades throughout.  Moreover, oxen also participate in the parade.  But what does the Trays’ Festival celebrate?  It’s a religious festival which dates back to the 13th century.  What’s more, its name comes from the trays which the girls carry on their heads throughout the procession.  Originally, the bread was given to the poor, as was the meat from the slaughtered oxen.  In addition to this, wine was and still is free flowing from barrels.  Lastly, the festival occurs every 4 years, most recently in 2019.

Enjoy your Visit to the Tomar Attractions 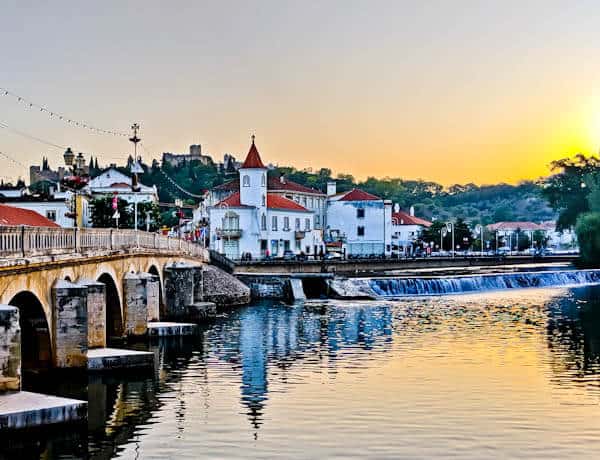 I highly recommend you stay at least 2 nights in Tomar so you can appreciate all it has to offer.  Enjoy your stay in Tomar Portugal!

Have you heard of the picturesque Portuguese towns of Sintra or Tavira?