Burnley FC are one of the founder members of the English Football League.  What’s more, they play at Turf Moor stadium which is one of the oldest stadiums in the world.  Here are a few reasons to take a Turf Moor Stadium tour;

Turf Moor is within walking distance of Burnley center therefore you can stay anywhere in the city when you visit.  Stadium tours are usually every Thursday and Saturday but check the official website for confirmation. 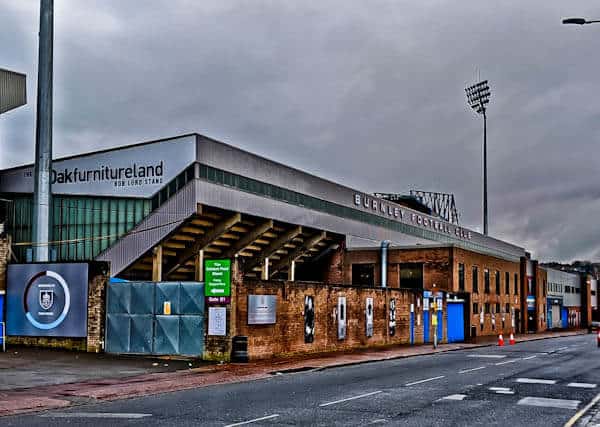 Turf Moor stadium is almost in the center of Burnley therefore it’s incredibly convenient to visit.  As a matter of fact it’s just a 15 minute walk from both Burnley trains stations as well as the bus station.  Moreover, there’s lots of free street parking surrounding the stadium.  When you visit on a non match day for a stadium tour you can park for free in the stadium car park. 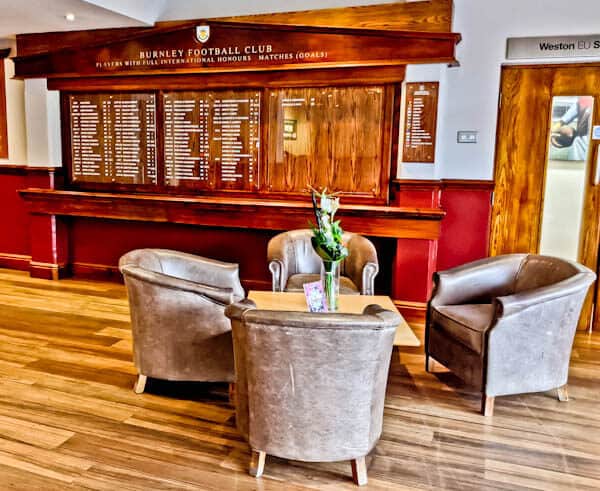 The meeting point for stadium tours is at the main entrance on Harry Potts Way.  You can sit and wait whilst you read about the players with international honors.  Lastly, the stadium tours begin at 11 am and you should arrive 10 minutes before. 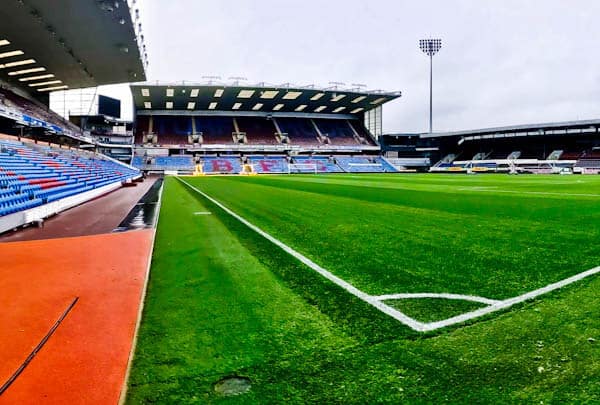 Turf Moor stadium is the 8th oldest stadium in the UK.  It was first used in 1883.  Some claim it’s the oldest continuously used stadium in the UK as older stadiums have had periods without use.  Today, Turf Moor has a capacity of around 22,000 seats.  Interestingly, it still has many wooden seats.  For this reason, you get a true historic match day experience if you watch a game.  After all, Burnley is one of the founder members of the football league and they’ve played here since its inaugural season back in 1888.

Which is the oldest stadium in the UK?  Bramall Lane in Sheffield. 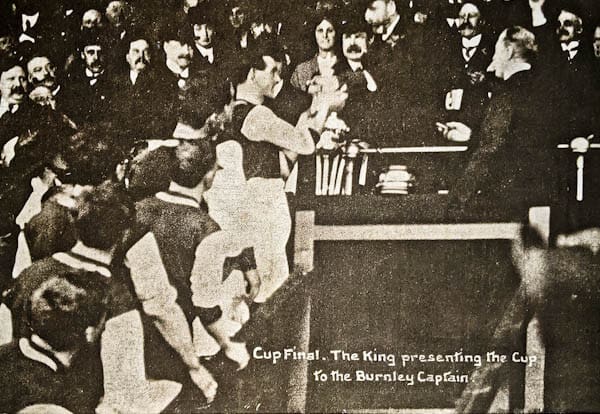 Did you know Burnley have won the old version of the Premier League twice.  The first time was in 1921, then again in 1960.  What’s more, they won the FA Cup in 1914.  King George V famously awarded them the trophy at Crystal Palace.  This was the first time a reigning monarch awarded the trophy. 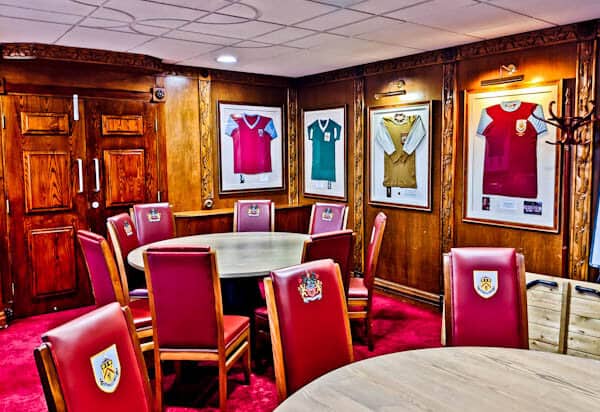 A surprising highlight to this stadium tour is a visit to the majestic Burnley FC boardroom.  Can you imagine the important decisions taken here throughout the years?  Furthermore, the contrasting moods as the team embraced both success and failure. 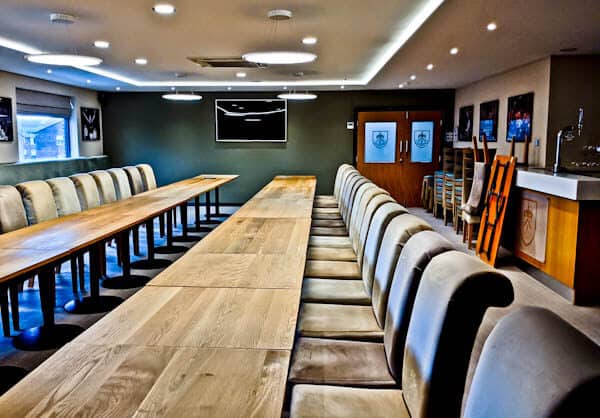 Adjacent to the historic boardroom is the modern boardroom.  I must say, this room feels rather empty and without character in comparison.  Nonetheless, it’s much more spacious. 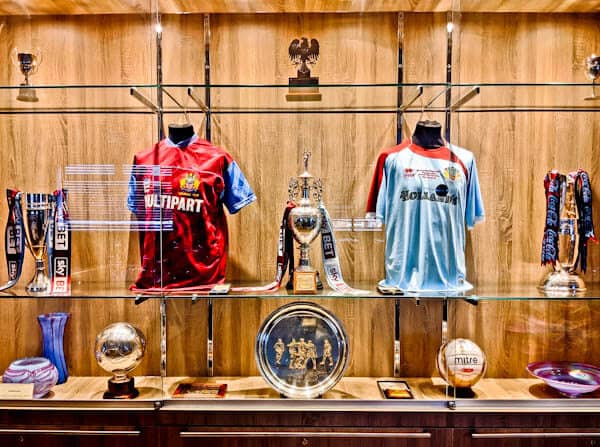 Yes, Burnley FC do have a trophy room.  Trophies come with all the promotions they’ve achieved (after relegation of course!).  Additionally, as I mentioned before they won the old League 1 twice as well as an FA Cup.  What’s more, there are some souvenirs on display gifted by visiting teams including Besiktas who recently visited from Istanbul. 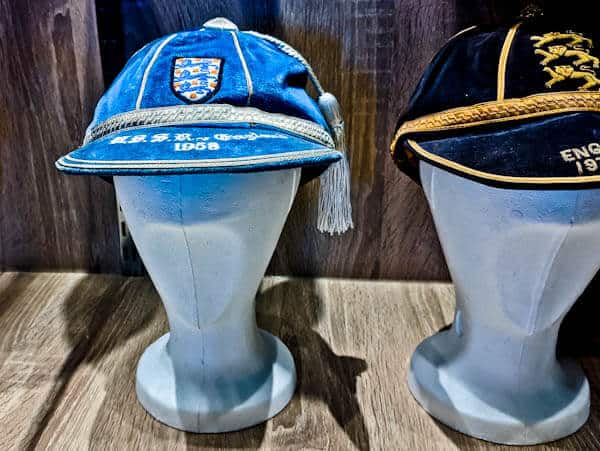 The Burnley museum features several players caps on display.  One which stood out to me was the 1958 USSR vs England cap.  This is in fact from the 1958 World Cup where the score finished 2-2.  But why is there an England World Cup 1958 cap in the Burnley museum?  Former Burnley goalkeeper, Colin McDonald was also the England goalkeeper and played all 4 matches during the 1958 World Cup.

Where was the 1958 World Cup tournament held?  Here’s a clue, the final was held in Stockholm. 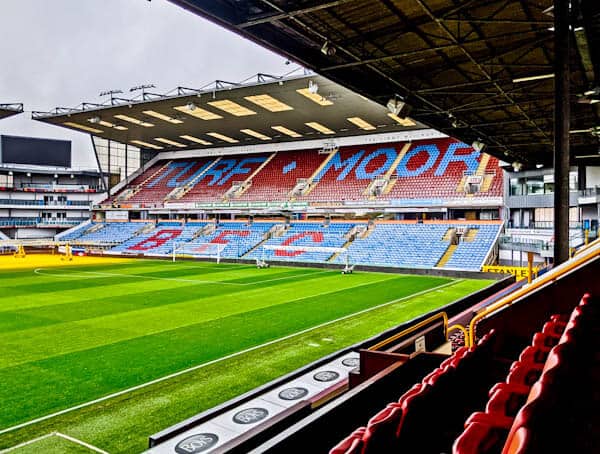 Where do the Burnely FC directors and VIPs sit to enjoy the game?  In the comfy seats of the VIP section of course.  In fact, you’ll sit in the padded seats for a while as the tour guide explains the different parts of the stadium and how it’s grown over the years. 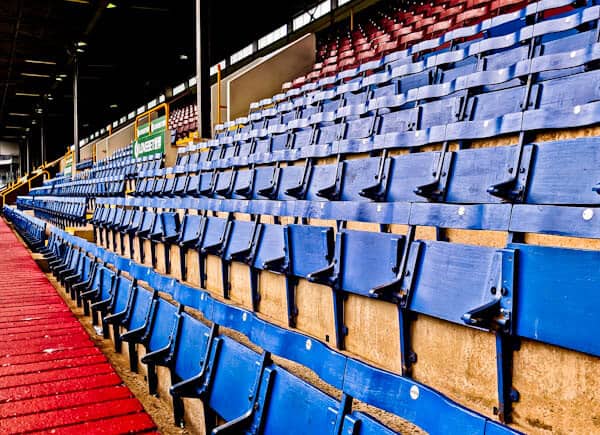 Parts of the Burnley FC stand are like a museum!  Where else can you sit in authentic wooden seats to watch a Premier League game in the 21st century?  Maybe a small part Goodison Park?  Surprisingly, there are lots of pictures of Royal Burnley FC fan, Prince Charles in this section floating around the internet. 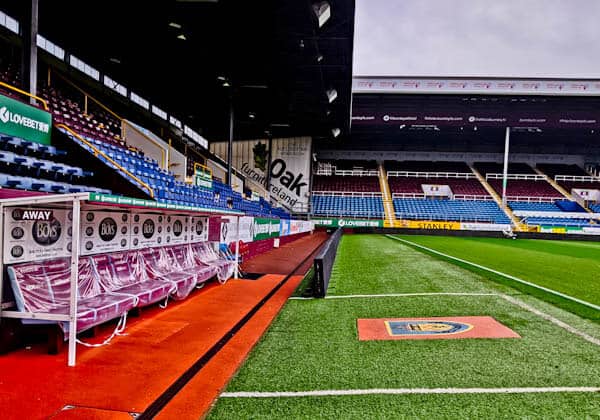 One of the highlights of the stadium tour is to stand pitch side.  Additionally, you’re welcome to sit in the dugouts where many Premier League greats have sat.  Something unique at Burnley is that the players tunnel does not come out to the dugouts.  It actually enters the stadium in the far corner between the James Hargreaves and Cricket Field Stands.  Nonetheless, this is wonderful place to take a souvenir photo. 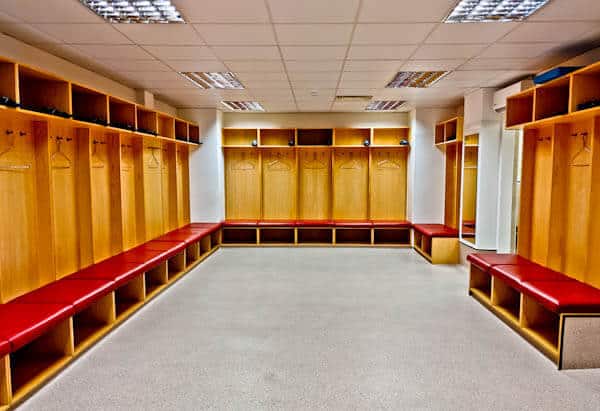 The Burnley FC changing rooms are the perfect size to promote team spirit.  Not too spacious, as well as being able to see 360 degrees to all the other players and of course, the manager.  In addition, they also have access to excellent massage facilities, ice baths and showers. 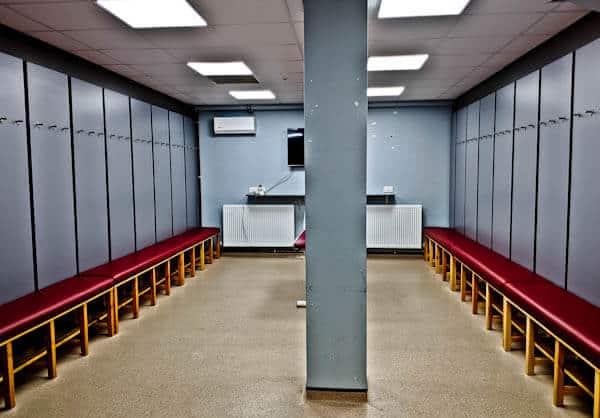 The away changing rooms at Turf Moor are tiny.  As a matter of fact, along with the away facilities at St James Park, they are the smallest in the Premier League.  What makes this situation more uncomfortable is the huge pillar in the middle of the room.  This certainly does not promote team spirit!  Do they have access to the same facilities as the home team?  Of course not, this makes Turf Moor a difficult ground to visit. 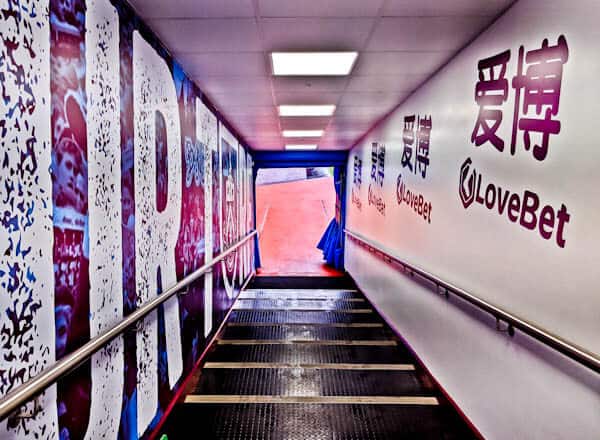 As I mentioned, the players tunnel enters Turf Moor stadium from the far corner.  This is similar to Craven Cottage at Fulham but without the cottage!  Take a walk down the players tunnel after you visit the changing rooms.  This is a good place to take a souvenir photo! 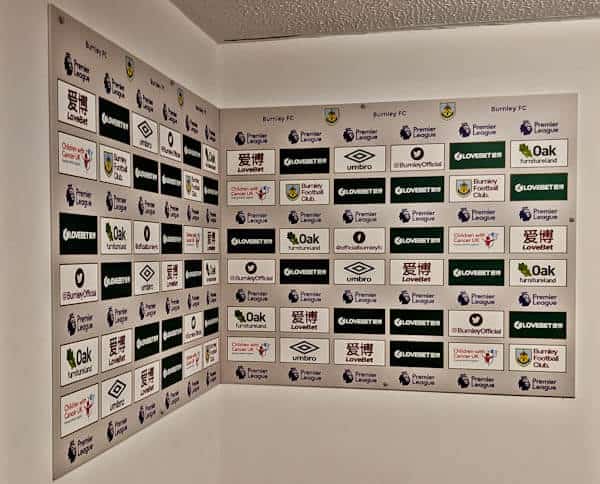 Take a photo in front of the flash interview boards which carry all the current Burnley FC and Premier League sponsors. 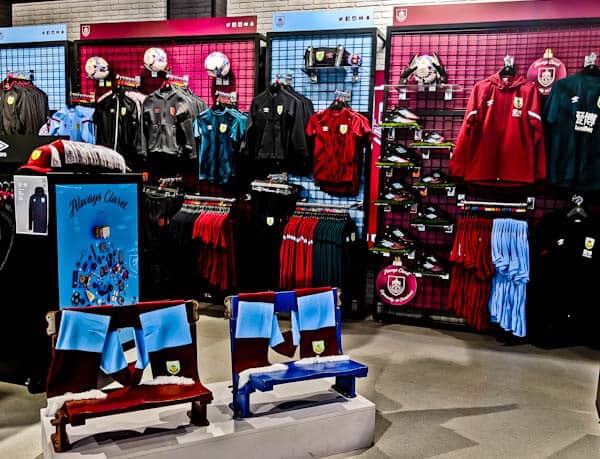 The Burnley FC club shop is a pleasant place to be on a non-match day.  You can stroll around and admire every kind of Burnley FC merchandise you can imagine.  What’s more, the prices are reasonable here, especially in comparison to the club shop at Old Trafford.  Finally, make sure to check out the historic wooden seats on display in the shop. 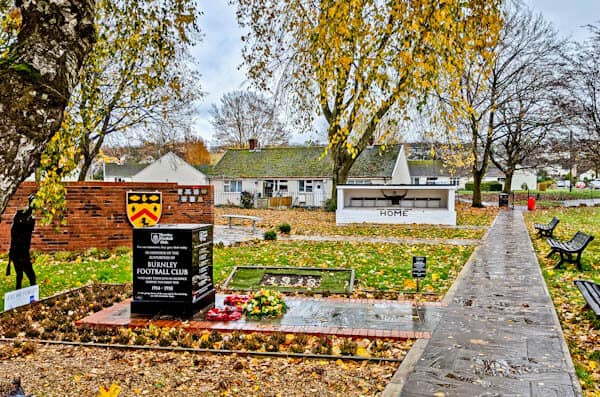 Take time to explore the exterior of Turf Moor Stadium.  There are three notable points of interest.  Firstly and most importantly is the World War Memorial.  This commemorates both the players and fans who gave their lives during this tough period.  Secondly, around the stadium are life size pictures of former players.  This will bring back a lot of memories for the older fans.  Finally, look out for the blue plaque which states Burnley FC are a founder member of the English Football League.

Did you know there is a similar war memorial at Hearts in Edinburgh? 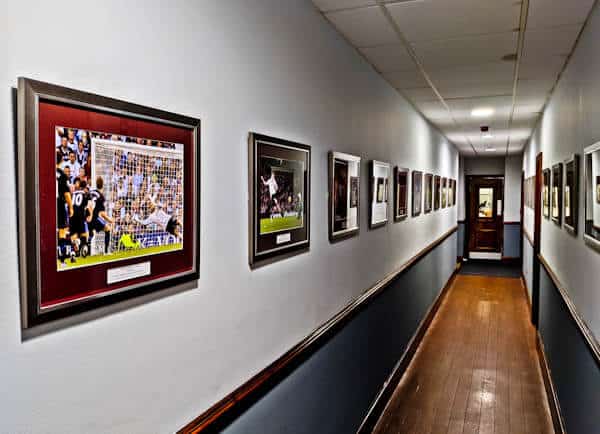 Be sure to pay attention to the details as you explore this historic venue.  There are historic pictures of previous teams, players as well as famous moments displayed throughout the stadium.  As a matter of fact, there’s an especially interesting display which shows every Burnley team kit since their formation in 1882.

Visiting the north of England? Check out the Leeds United, Sheffield United and Sheffield Wednesday stadiums.