Villa Park is the famous historic stadium of Aston Villa, one of the twelve founder members of the English football league.  Here are a few reasons to take an Villa Park stadium tour;

Book your Villa Park stadium tour online to see availability and times.  Aston Villa stadium is easily reachable from Birmingham city center, so you can choose any hotel which suites your budget. 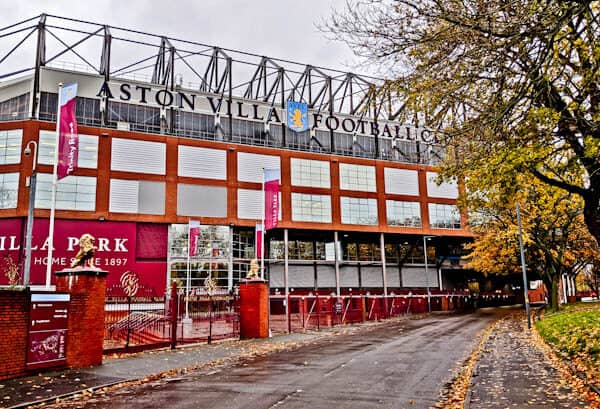 Villa Park stadium is in Aston, a northern suburb of Birmingham.  You can walk from the city center which will take around 40 minutes.  Alternatively, catch the train to Aston or Witton stations.  The nearest train station is Witton which is a 5 minute walk away.  Finally, both buses number 7 and 11 pass by the stadium. 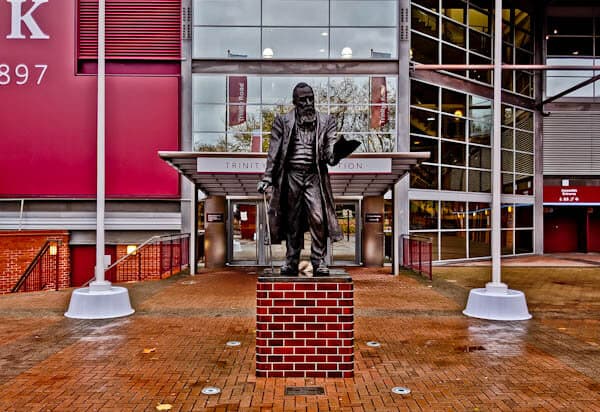 As you explore Villa Park stadium the only statue on show is William McGregor.  But who is William McGregor?  He was not only the first director of Aston Villa but the man who founded the English Football League.  There were twelve inaugural members of the football league including Aston Villa.  Can you name the other eleven?  Here’s a head start, Everton and Burnley are two of them.  Lastly, Aston Villa were runners up in the first ever league season back in 1888 – 1889. 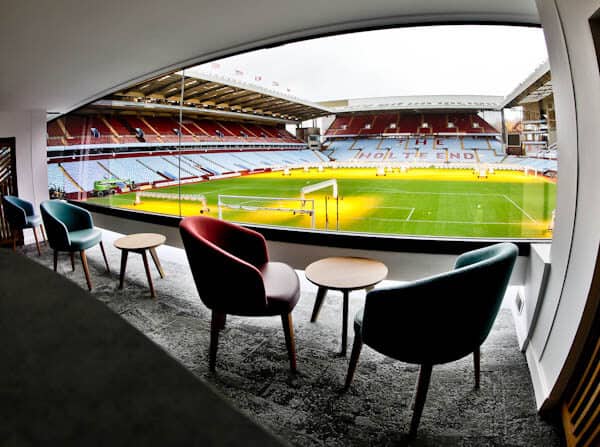 The Villa Park stadium tour has perhaps the best meeting point of all stadium tours.  Guests are welcome to wait in the VIP lounge which features perfect pitch views.  As a result, this certainly puts you in the mood for what is guaranteed to be an amazing stadium tour! 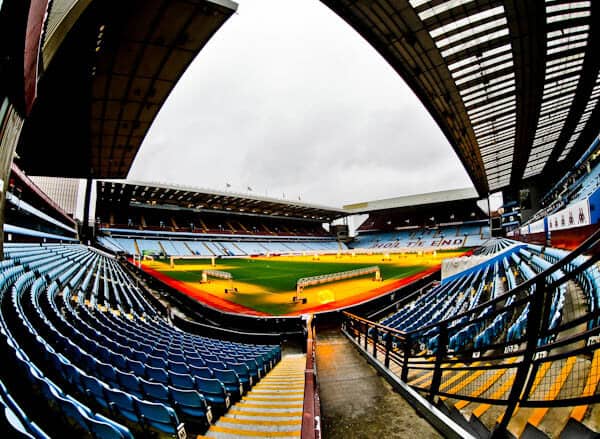 Firstly, the capacity is over 42,000 seats.  However, the largest attendance is over 76,000 spectators which was before the Hillsborough incident when safety rules were not strict.  Of course, the stadium is home to Aston Villa but what else is it used for?  It hosted both 1966 World Cup and more recently Euro 96 matches.  Argentina, Spain and West Germany played here during World Cup 1966.  In addition, a massive 55 FA Cup semi finals were played here.  On to rugby, two 2015 Rugby World Cup final games were held here.  Famous musicians who have performed concerts here include; Rod Stewart, Duran Duran, Bruce Springsteen and Bon Jovi.

If I asked you where was the 2012 Community Shield was held? you’d probably guess Wembley Stadium.  It was in fact here at Villa Park as Wembley was in use for the Olympics. 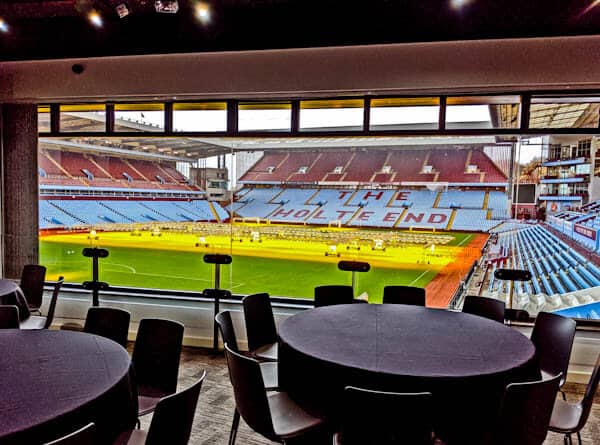 What is a VIP match day experience like at Villa Park.  You’ll visit not only the VIP sections but also the corporate boxes.  Additionally, there’s also a kids section you’ll visit which welcomes disadvantaged kids from the area. 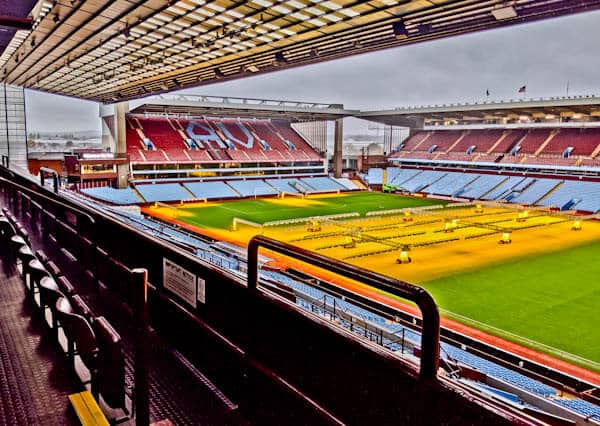 Prince William is perhaps the most famous Aston Villa fan but where does he sit when he visits the stadium?  As you tour the VIP areas of Villa Park stadium the guide will point out his seat.  As a matter of fact, you’re welcome to sit in it and enjoy the stadium views he does.

Attention to Detail in the Conference Rooms 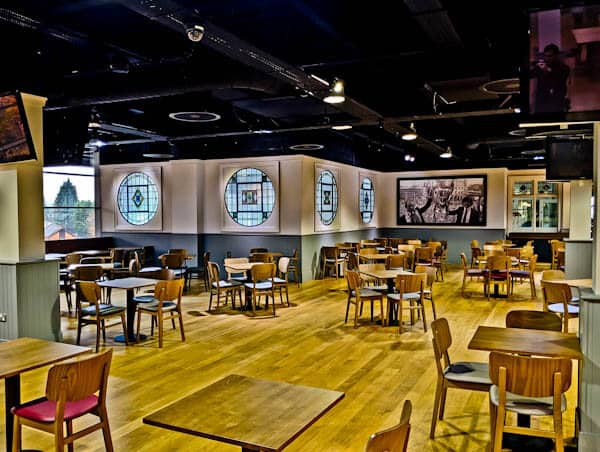 Trinity Road Stand used to be one of the finest examples of Archibald Leitch architecture in the United Kingdom.  Unfortunately, this stand was destroyed and replaced with a huge modern stand.  An interesting fact is people would travel from all over the world to see this architecture.  On one hand, it’s sad to lose such a piece of history.  On the other hand, Aston Villa football club did the right thing by modernizing their stand and moving forward as a football club.  After all, they’re a football club not a museum.  However, the stained glass windows in the conference rooms have been saved from the original stand.  Finally, if you wish to see real examples of Archibald Leitch architecture, visit Ibrox in Glasgow or Craven Cottage in London. 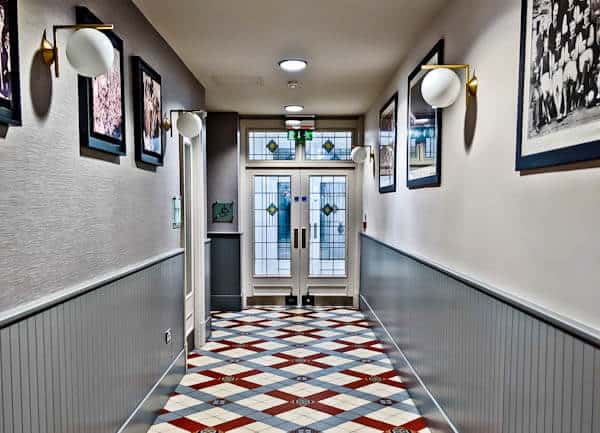 Although much of the stadium is either new or refurbished, they’ve definitely maintained a historic feel throughout.  There is no official Aston Villa museum but many historic team pictures and moments are on display throughout the stadium. 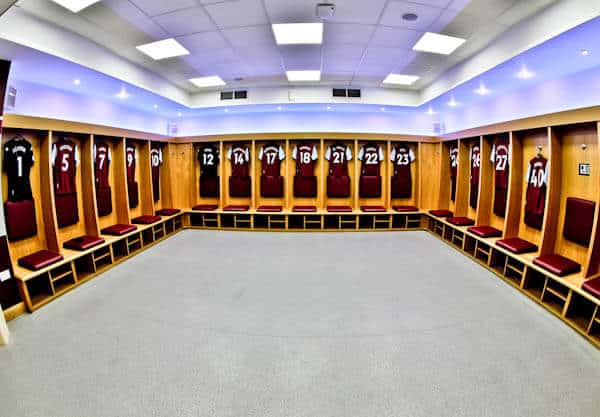 A visit to the home team dressing room is arguably the best part of the tour.  Not only can you sit by your favorite players shirt but you can also visit the fitness and massage facilities. 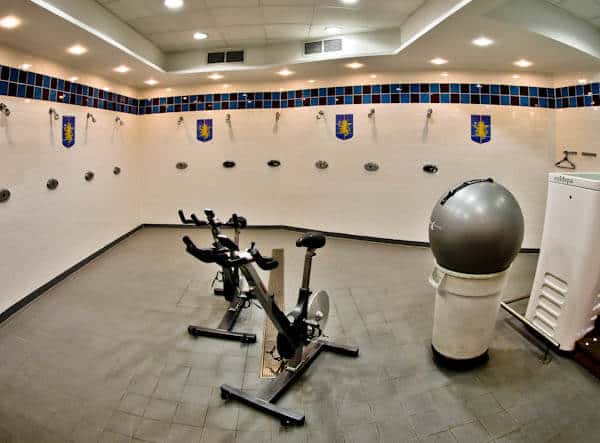 As you’d imagine, the shower and ice bath facilities are decorated with Aston Villa badges.  Aston Villa fans, I’m sure you’d love to decorate your bathroom like this! 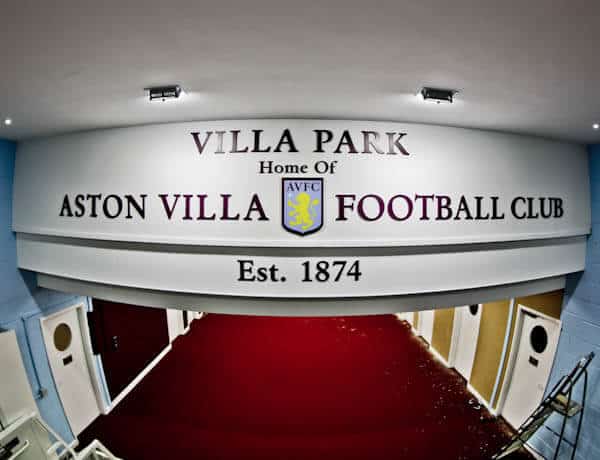 Walk down the famous Aston Villa players tunnel and onto the pitch, exactly like the players.  As a matter of fact, the tour guide plays the same music as match day.  Escape’ by Craig Armstrong is the song Aston Villa play when the teams come out.  In my opinion, it’s much better than what they play at Old Trafford!  Finally, sorry about my picture, as they were refurbishing the players tunnel when I visited but it should be complete and as aesthetically pleasing as the rest of Villa Park now! 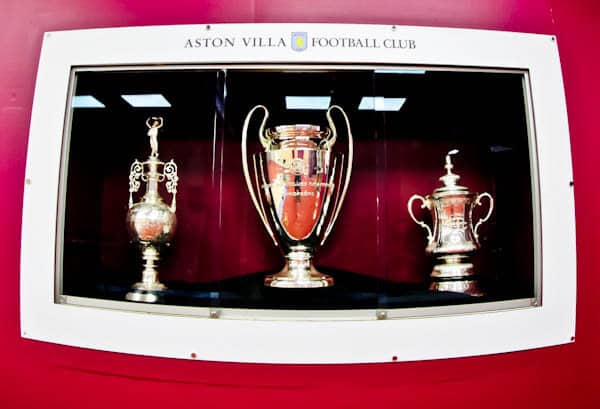 Yes, Aston Villa won the Champions League trophy in 1982.  A replica of this trophy is displayed in the players tunnel.  Alongside it are the FA Cup and old League 1 trophies which they have won a massive 7 times each!  Maybe the tour guide will remind you here that neither Arsenal, Tottenham, Newcastle United nor Man City have ever won the Champions League. 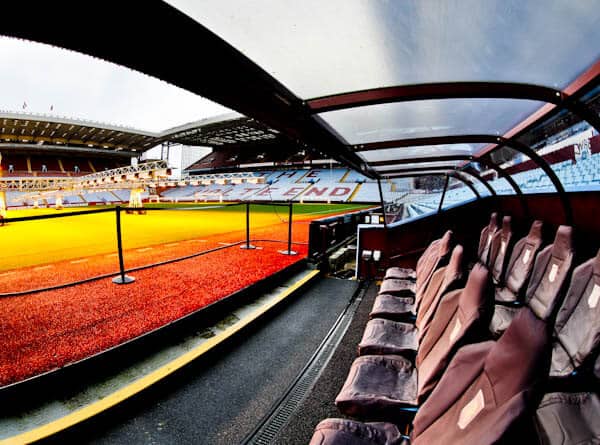 Sit in the dugouts where so many famous managers have sat.  As Aston Villa are currently a Premier League team, visitors include the best of the best such as Jurgen Klopp and Pep Guardiola.  Previously, in the Championship, visitors included, Marcelo Bielsa and Frank Lampard.  Don’t forget to get a picture of yourself here with the famous Holte End in the background.  Once upon a time the Holte End was the largest Kop in England. 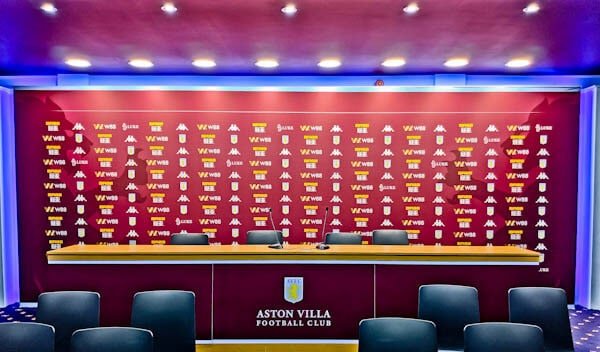 All post match interviews are held in the Aston Villa press room.  What’s more, you have access on the stadium tour where you can sit and pose for pictures.  Wouldn’t it be realistic if you had an Aston Villa shirt on for this picture! 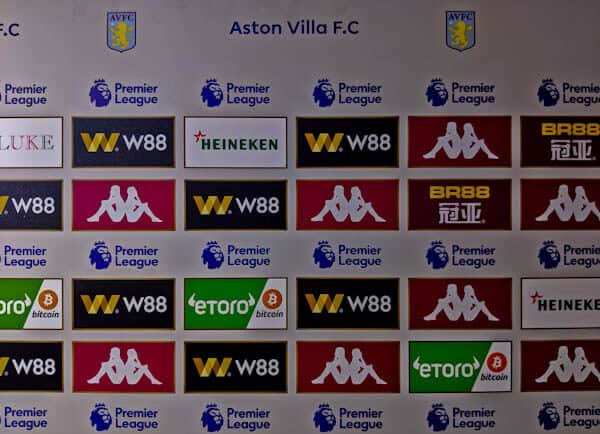 Have you seen the quick interviews they do with players after the match?  These are created in front of advertisement boards.  You’re welcome to take pictures or maybe make a quick little interview in front of these iconic flash interview boards. 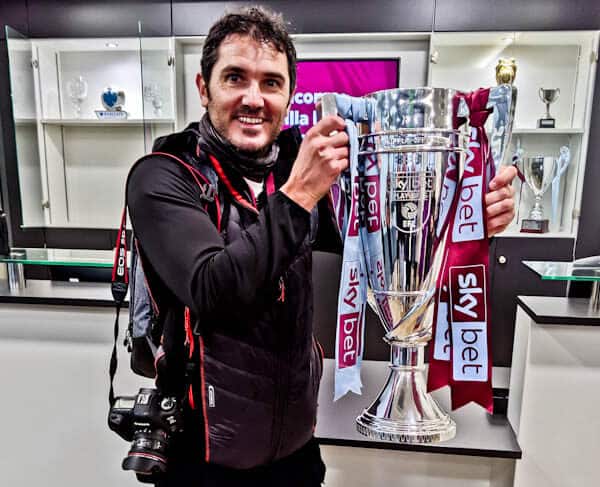 When I visited Villa Park stadium, I was lucky they had recently won the Championship play off trophy.  For this reason, I was able to hold and take pictures with the real trophy itself. 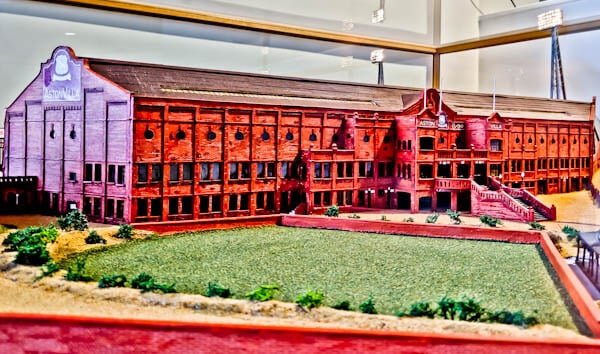 What did the famous Archibald Leitch stand which people traveled from all over the world to see look like?  Ask the guide to show you the incredibly accurate model of the former Villa Park stadium.  If you’re lucky he may also give you a recent match day program too.  As I mentioned earlier, existing works by Archibald Leitch still exist at both Craven Cottage in London as well as Ibrox in Glasgow. 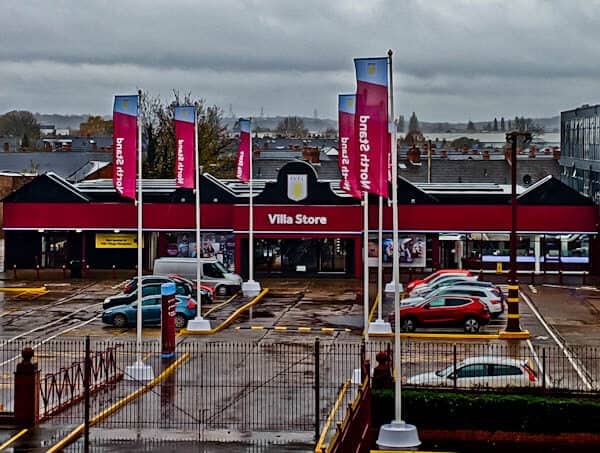 Be sure to visit the Villa Store, either before or after your Villa Park stadium tour.  Even if you’re not a Villa fan, there’s lots of Birmingham inspired merchandise.  Most importantly, all who take the Aston Villa stadium tour get 10% everything in store.  I highly recommend this tour, the guides are excellent which makes it one of the best stadium tours in Britain.

Interested in rugby?  Check out Twickenham and Murrayfield stadiums.