Visit Chateau de Fountainebleau on a Day Trip from Paris

Chateau de Fontainebleau is a former royal palace and UNESCO World Heritage Site on the outskirts of Paris.  Let’s explore the Palace of Fontainebleau with original photography. 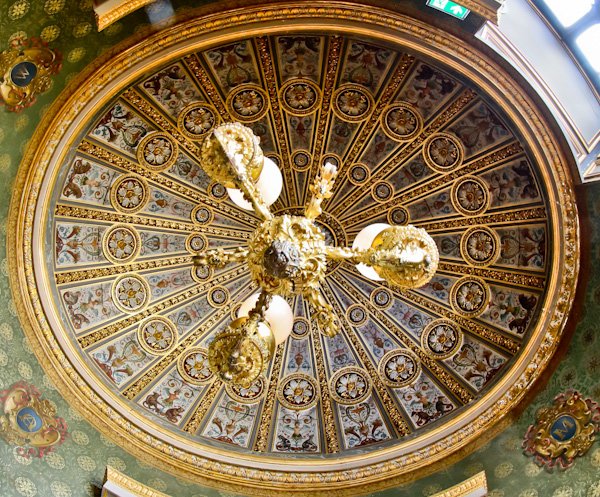 Firstly, let me share some facts you must know before you visit Chateau de Fontainebleau. 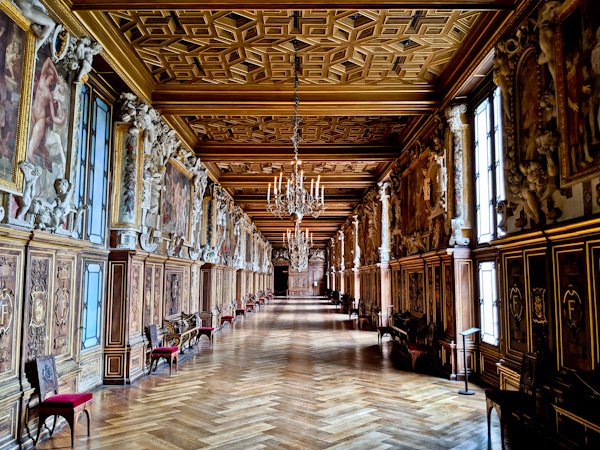 François I Gallery is a 64 meter long hallway featuring intricate Renaissance era artwork.  It’s purpose is to connect King Francis I apartment to the Trinity Chapel.  Hence the name, François I Gallery.  The majority of artwork was created in the 16th century by Italian artists, Rosso Fiorentino and Francesco Primaticcio.  Take your time to admire the truly unique artwork as you walk down this stunning hallway. 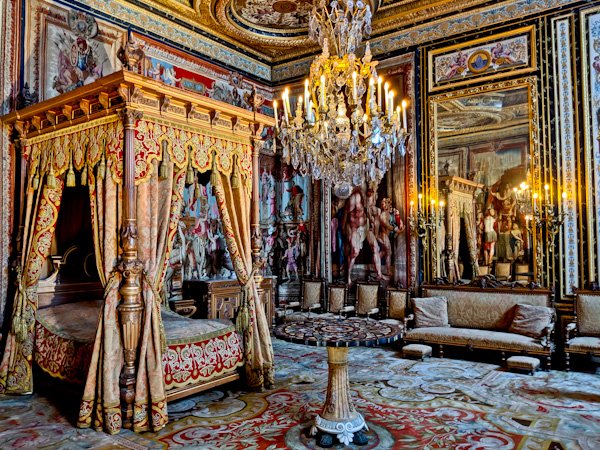 For me, the Pope’s apartment is the most royally decorated room in Fontainebleau, perhaps the world.  It gets its name because Pope Pius VII stayed here twice in 1804.  Furthermore, he stayed here for 2 years from 1812-1814 as Napoleons prisoner.  Did you know there’s also a Pope’s Apartment at Yamoussoukro, Ivory Coast? 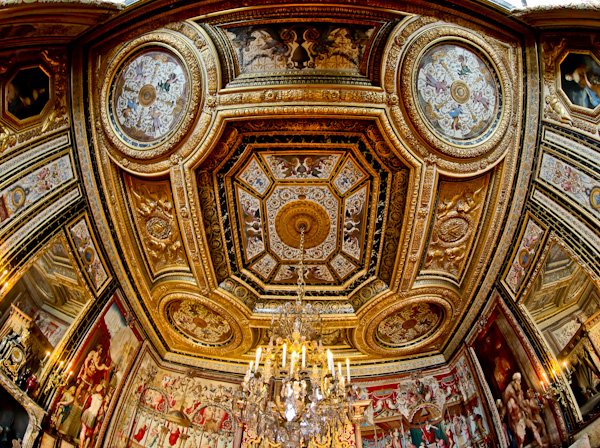 With all the detail and royal bed in the Pope’s Apartment you’d be forgiven for forgetting to look up.  But be sure to admire the stunning ceiling. 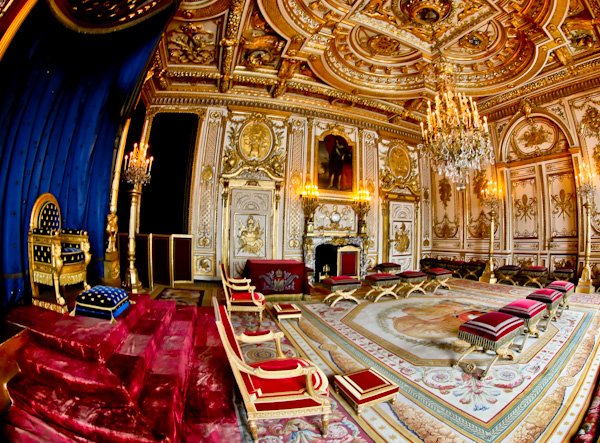 Chateau de Fontainebleau was lived in by every French monarch over 8 centuries.  For this reason, it houses a stunning throne room.  What’s more, it’s the only throne room anywhere in France which still features its original furniture. 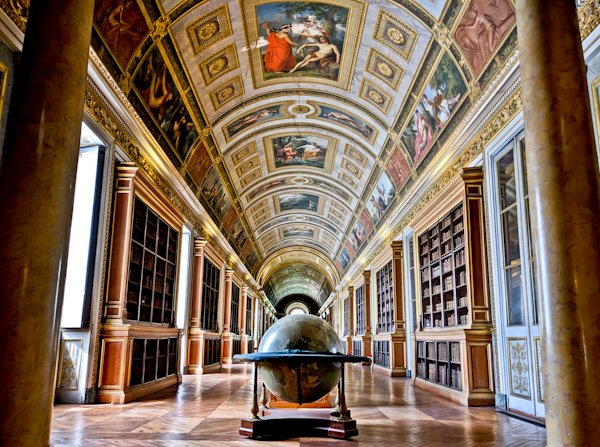 Diana Gallery was created during the era of King Henri IV.  Artwork tells the story of the goddess Diana.  Napoleon I and Louis XVIII refurbished Diana Gallery during their reigns.  Afterwards, Napoleon III converted the gallery to a library.  Perhaps one of the most beautiful libraries in the world.  Finally, Diana Gallery reminds me of the Gallery of Maps in Vatican City. 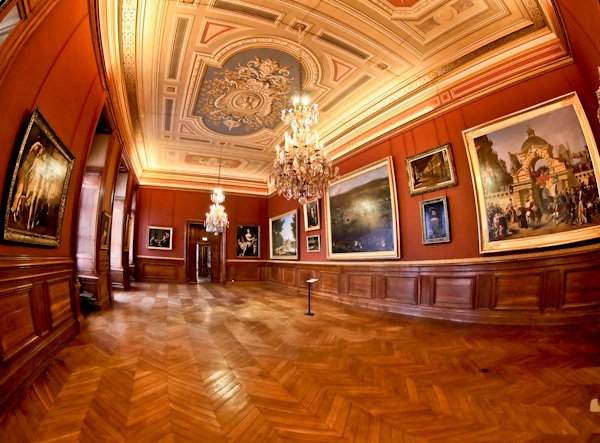 Napoleon III created the Gallery of Splendors from a connecting room.  He chose the word splendor as his desire was to seamlessly connect rooms from different eras.  As a matter of fact, the Gallery of Splendors features artwork demonstrating the history of Fontainebleau.  Artwork on display show events at Fontainebleau from Renaissance to Napoleon I. 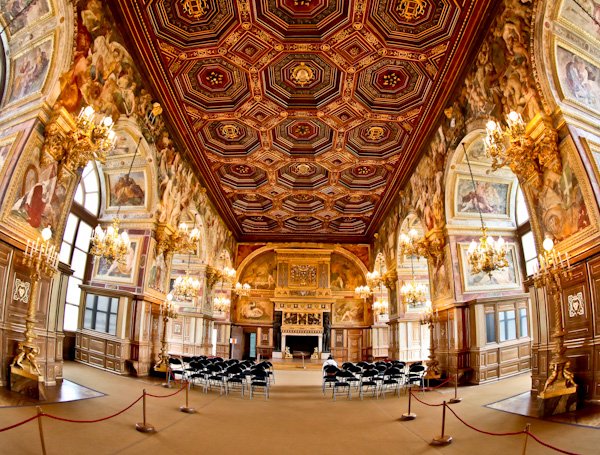 The Renaissance era Ballroom was created by King Henry II beginning in 1552.  This stunningly decorated ballroom has been described as the French Vatican. 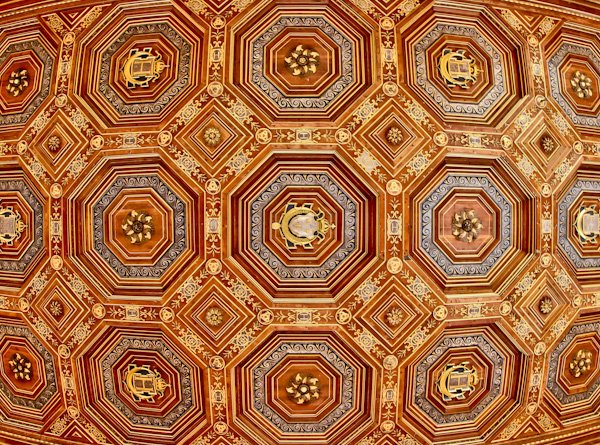 The Ballroom at Fontainebleau features a stunning Italian-inspired coffered ceiling.

Royal Chapel of the Trinity 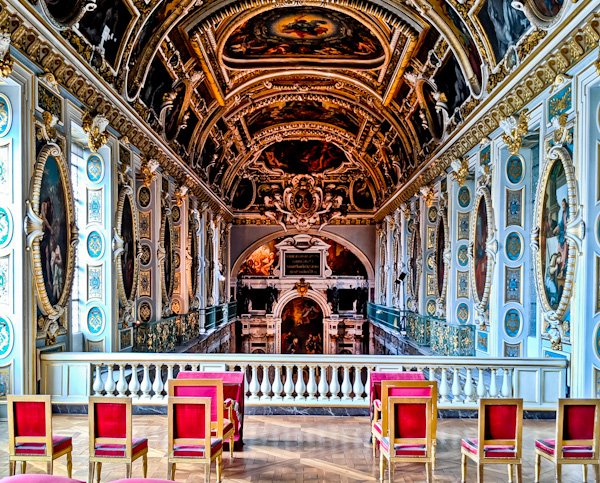 The Royal Chapel of Trinity was designed by artist, Martin Fréminet.  The goal was to house God as well as His Majesty.  When you walk into the chapel I’m sure you’ll agree this difficult goal was achieved.  Important events which took place here include the marriage of King Louis XV to Marie Leczinska as well as the baptism of Napolean III. 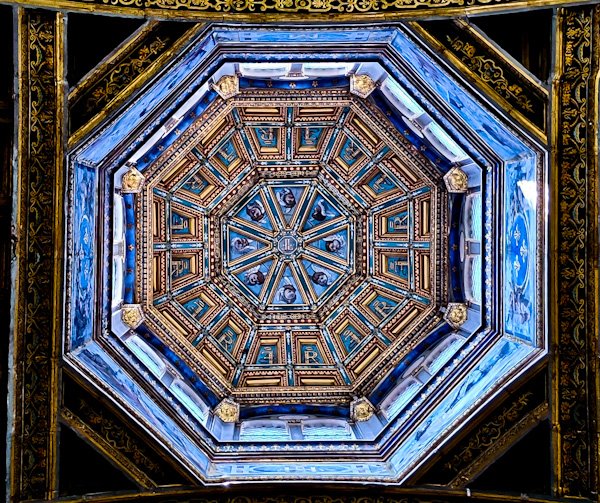 Royal St. Saturnin’s Upper Chapel was designed to let as much natural light in as much as possible.  As a result, visitors will witness magical beams of light similar to those you see in the mosques of Iran.  This is the oldest chapel at Chateau de Fontainebleau but why did they need another building?  Because Royal St. Saturnin’s Upper Chapel is not big enough for a large number of visitors.

The apartment of Emperor Napoleon I features several uniquely designed rooms.  One very significant room is The Salon of Abdication.  This is where Napoleon I signed the Act of Abdication.  Other rooms include Napoleons bedroom as well as his small bedroom (above).  Finally, Napoleon tried to poison himself in the Master bedroom.  When he survived, he famously said “God does not permit it”. 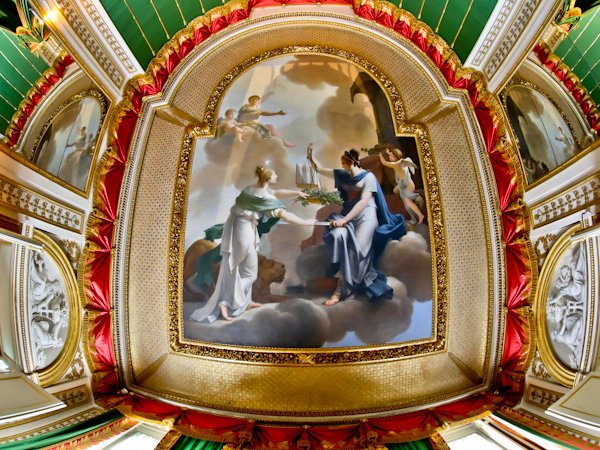 When you explore Napoleons Apartment be sure to look up at the finely decorated ceilings.

Cradle of the King of Rome 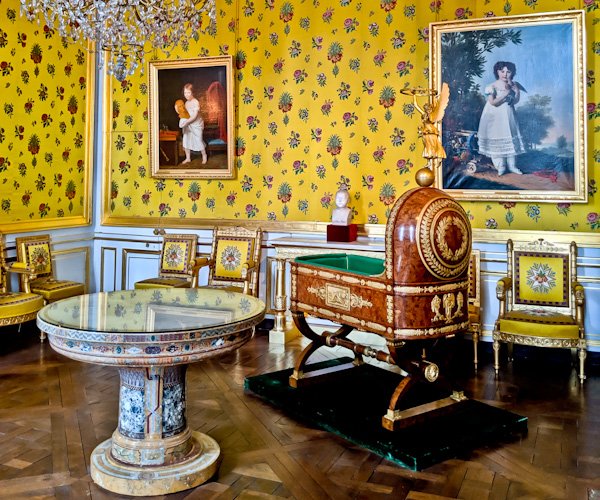 One of the rooms in Napoleons apartment features the cradle of the King of Rome, Napoleon II. 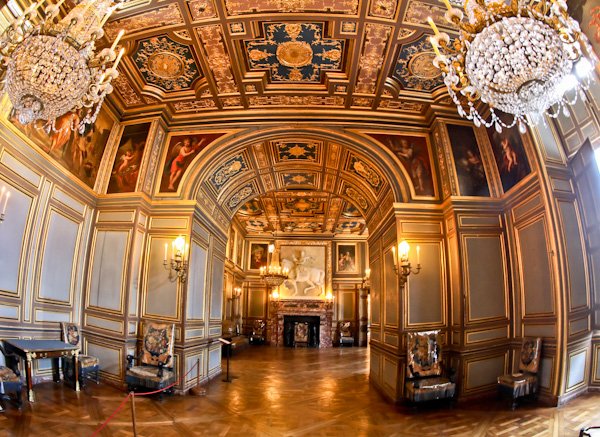 When you explore the rooms of King Louis IX, there is one piece of artwork which stands out above the fireplace.  The marble bas-relief of King Henri IV on horseback by Mathieu Jacquet.  It’s a tribute to King Henri IV, the most beloved of kings. 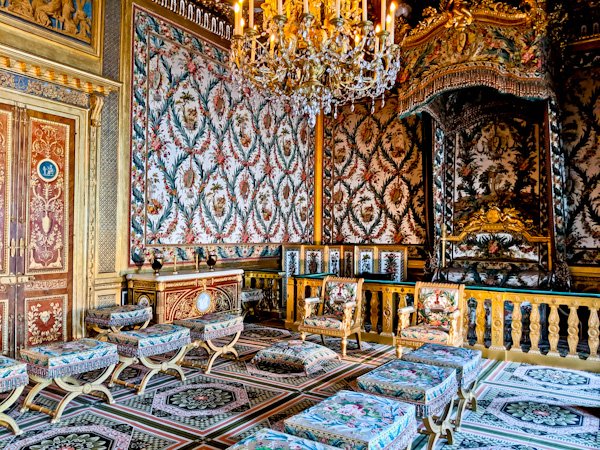 The Empress Bedchamber is the former bedroom of the Queens of France.  Throughout the centuries, it was used by all the Kings’ wives from Marie de Medici to Marie Antoinette.  Marie Antoinette designed the room you see today.  However, she never got to sleep here due to her execution before her design was completed.  Did you know Marie Antoinette’s robe is on display at the Conciergerie in central Paris? 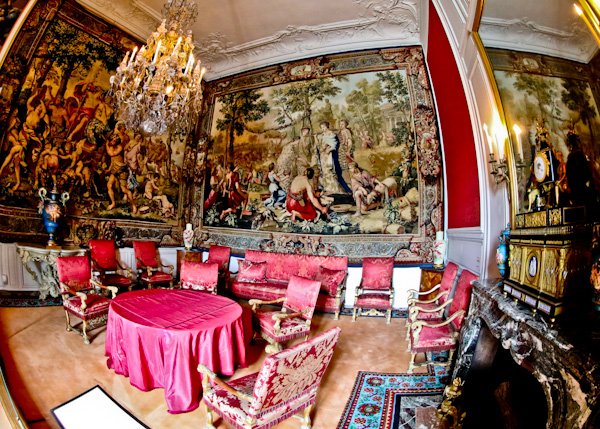 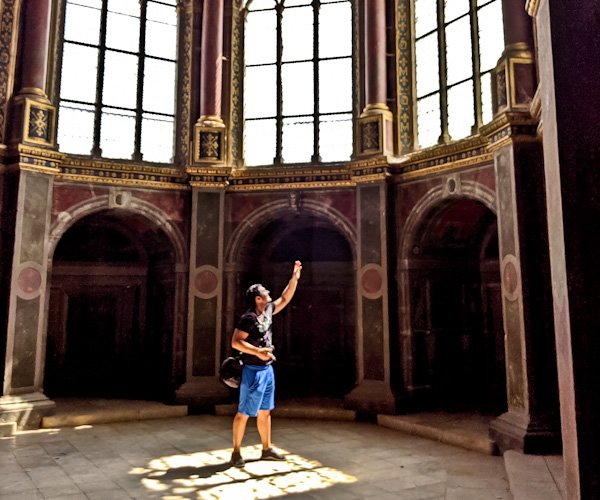 Chateau de Fontainebleau offers unlimited Instagram spots for those who like to pose for pictures.  Above, I’m catching a ray of light in the Royal St. Saturnin’s Upper Chapel.  Of course the places I’ve shared above such as François I Gallery, Diane Gallery and of course the Ballroom are stunning places to pose for photos.  Places I have not shared are there for you to discover such as the staircase for the King’s apartment and the oval staircase at the entrance. 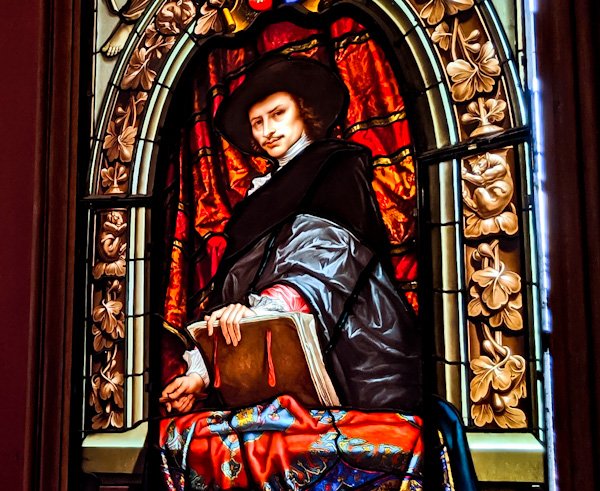 Chateau de Fontainebleau has been designed through centuries and every pixel has been thought out.  For this reason, keep your eyes open and take as much in as you can. 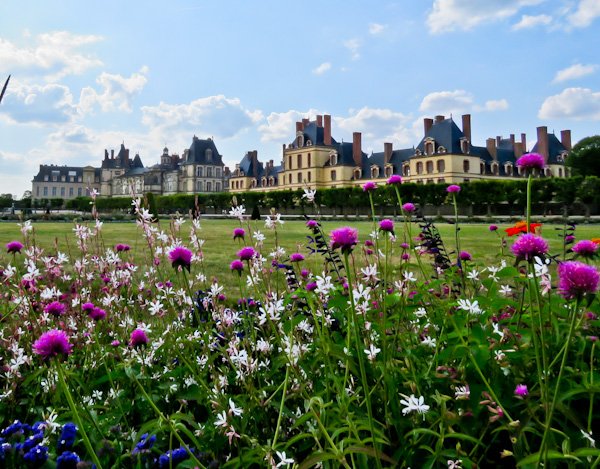 Henry IV Quarter housed outbuildings and kitchens in yellow colored buildings.  These have the feeling of Marienburg Castle in Hannover, Germany. 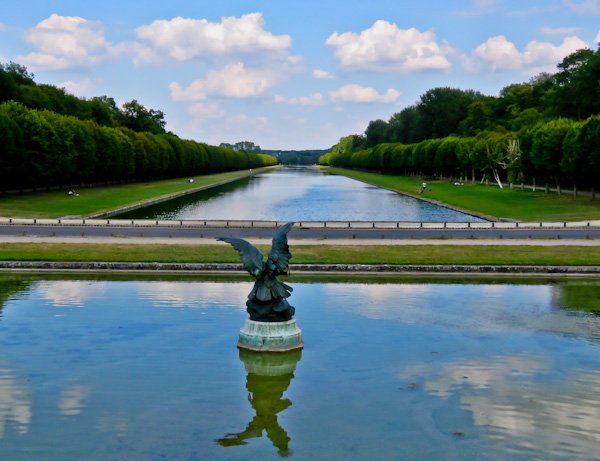 Known as the Grand Parterre, this is the largest Parterre in Europe.  The gardens were designed by iconic gardener, Andre Le Notre.  Andre Le Notre was also the mastermind behind the gardens of Versailles and Vaux le Vicomte. 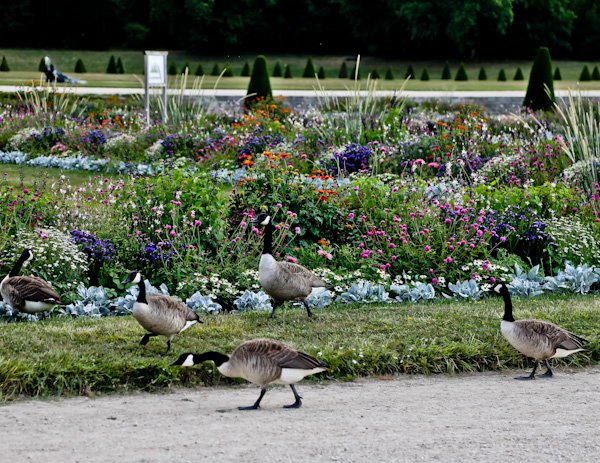 When I took a stroll through the well kept gardens of Fontainebleau I saw lots of geese and coot.  Additionally, I saw lots of smaller birds flying as well as insects, flora and fauna. 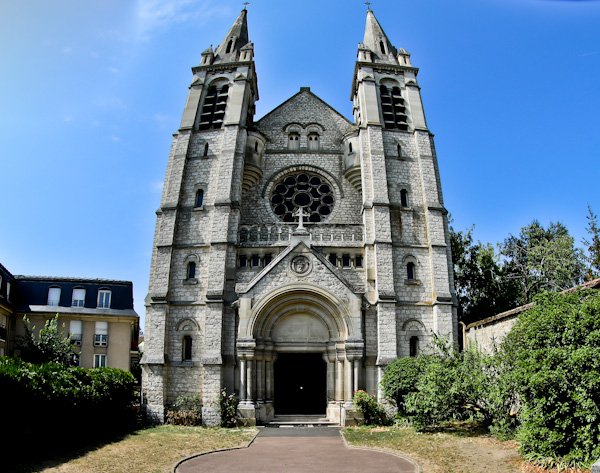 Avon, Seine-et-Marne is a cute little French town full of beauty.  As a matter of fact, I would say a walk through Avon is as rewarding as Chateau de Fontainebleau itself.  Photographers will love the colorful buildings and foodies will certainly enjoy the bakeries.

How to Travel from Paris to Fontainebleau 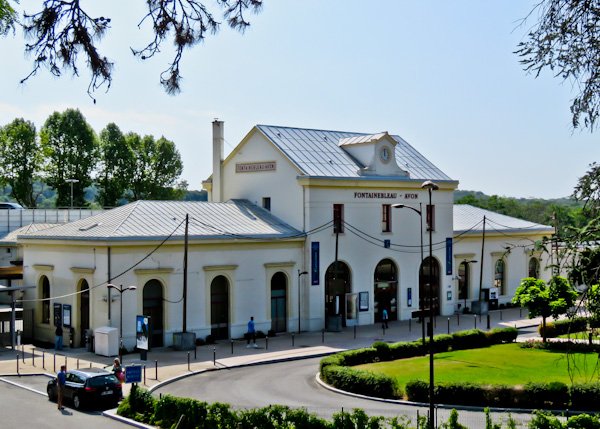 Firstly, in Paris you must take the Paris Metro to Gare de Lyon.  Once at Gare de Lyon, take the Transilien R pink train route to the Fontainebleau / Avon station.  From Fontainebleau / Avon station, you can take a bus to the chateau.  Alternatively, walk through the picturesque village of Avon to Fontainebleau.  This will give you chance to pick up breakfast at a bakery or buy a drink in a supermarket.  Finally, the train ticket from Paris will cost around €15 each way which includes your Metro ride.