Why to Visit Marienburg Castle from Hannover Germany

I share a few reasons why to visit Marienburg Castle near Hannover Germany.  Not only does it feature some extremely picturesque rooms but it also has a history closely linked to the British royal family.  Read on: 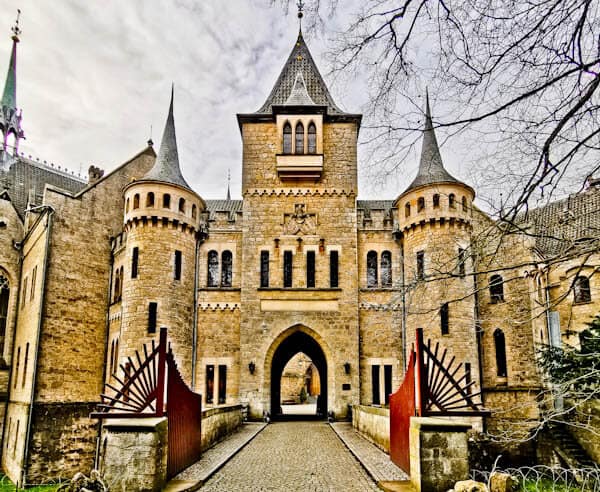 Firstly, the grand gates and entrance are a good place to take your photo.  But, let’s start by explaining a little Marienburg Castle history.  Marienburg Castle was the dream of Queen Marie of Hanover.  As a result, it was a gift from her husband, the blind King George V of Hannover.  He gave her the mountain which is named after her, Marienburg.  In addition, he gave her the future castle.  I mentioned earlier how royalty in Hannover are connected to the British royal family but how?  King George the V is the son of King Ernst August who was Queen Victoria’s uncle.  However, the connection is much more intertwined than this as the British King George I, II, III and IV were all from the Hannover royal family. 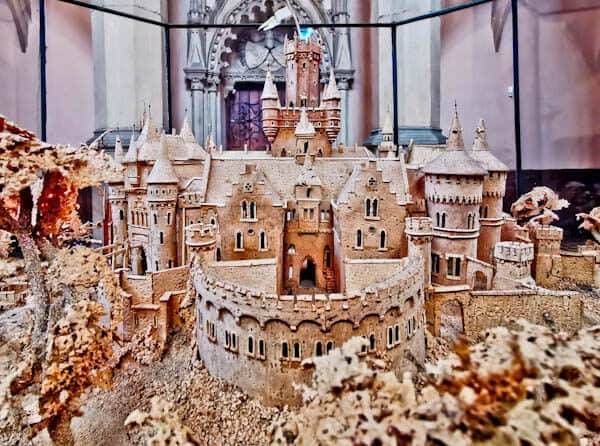 So, I mentioned that the king was blind so how could he see the castle he built for his wife?  You’ll see an exact replica made from cork in the main entrance hall.  This is the original which was touched by the king himself.  In additional, appreciate the Neo Gothic architecture surrounding you.

Domed Roof of the Entrance Hall 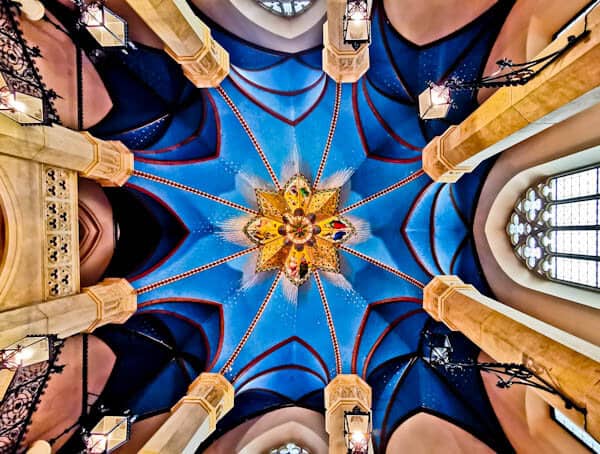 When you enter the entrance hall you must look up.  Its ceiling is one of the most beautiful parts of the castle.  The domed roof features the allegories of the arts. 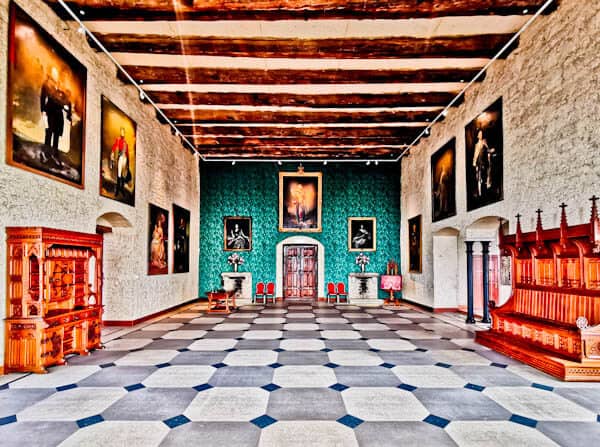 Next stop after the entrance hall is the Knight’s Hall.  This rooms features original paintings of the Hannover royal family.  Your guide will tell you who is who but you may recognize them if you do a little research before visiting.  For me, the most recognizable was King Ernst August who also has a statue in front of Hannover train station.  Be aware that this room was never finished as Queen Marie intended due to the annexation of Hannover by Prussia. 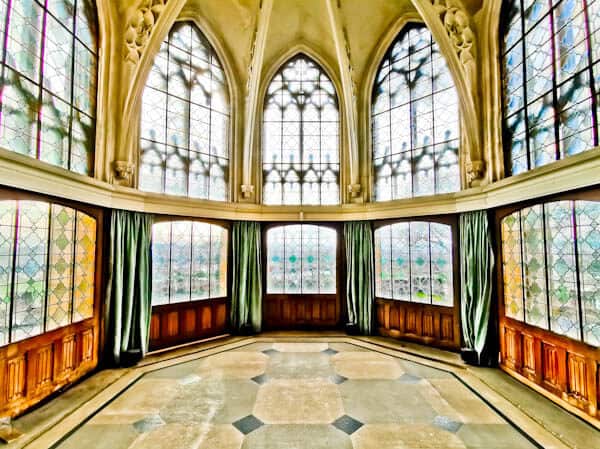 The Knight’s Hall does include a modern feature which was part of Queen Marie’s plans.  The windows can be lowered into the ground which creates an open area, perfect for the summer days. 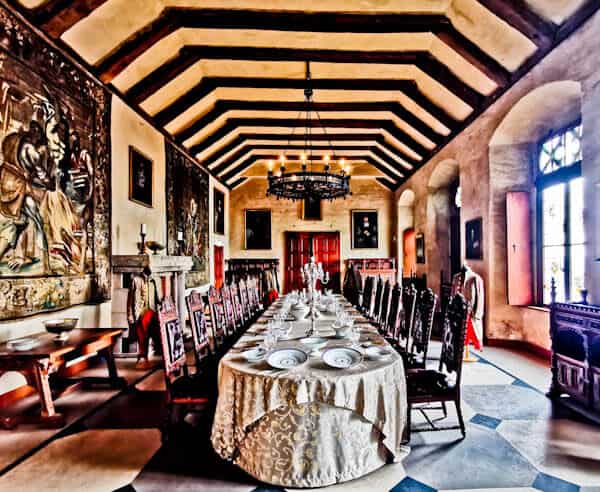 Adjoining the Knight’s Hall is a grand dining hall.  Take note of the Brussels tapestry hanging from the wall.  If you visit royal castles throughout Britain and France, you’ll recognize this kind of tapestry. 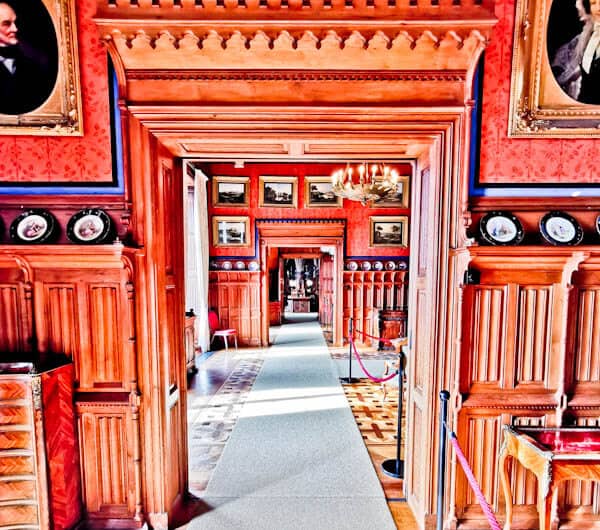 Today, the Queen’s rooms are exactly as she designed them.  For this reason, as you explore her various rooms, you’ll witness much attention to detail.  Those who enjoy posing for photos will enjoy this part of the castle.  In fact, it’s so grand I can compare it to Palace of Versailles. 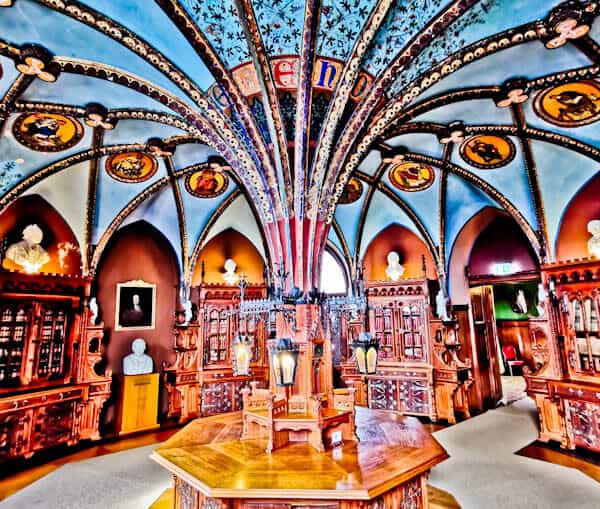 When you see a picture of the Queen’s Library it’s enough inspiration in itself to persuade you to visit Marienburg Castle.  As a matter of fact, this features what is probably the most impressive Gothic dome that you’ve never heard of or seen before.  Furthermore, you could spend hours in this library alone studying the architecture as well as studying the busts on display.  The bust which caught my eye was of the great German mathematician, Gottfried Leibniz. 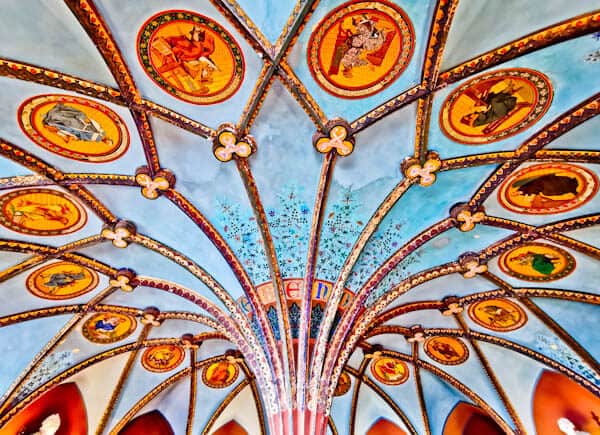 I don’t need to tell you to look up in the Queen’s Library as the thoughtful design of the Gothic Dome draws your eyes to the ceiling. 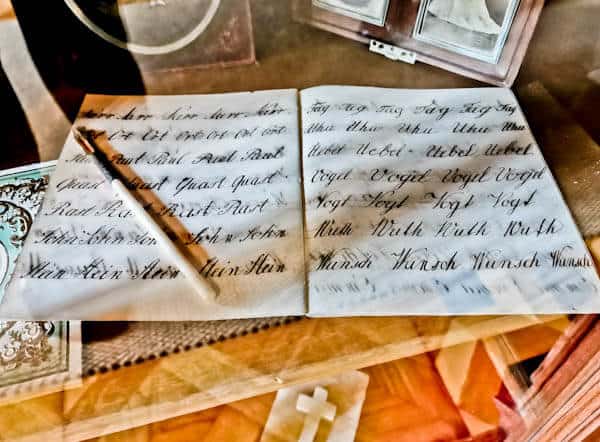 Adjacent to the library is a cabinet displaying original notes written by Queen Marie herself. 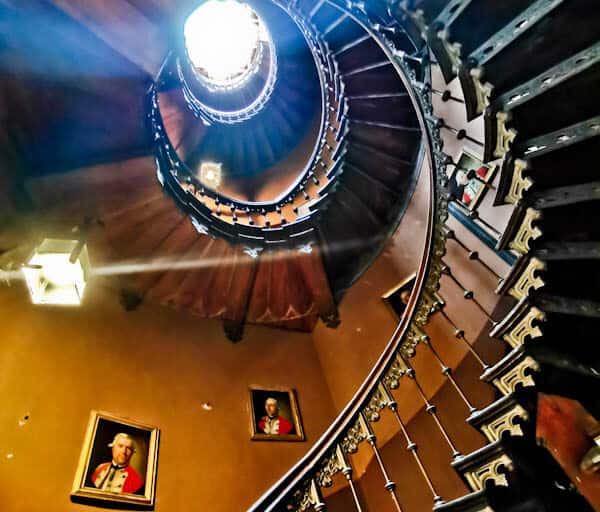 The original architect created a tower with a stunning spiral staircase.  However, due to changes in the plans, it’s not possible to reach the lookout and the staircase is now closed off.  None the less, it photographs beautifully from the  bottom. 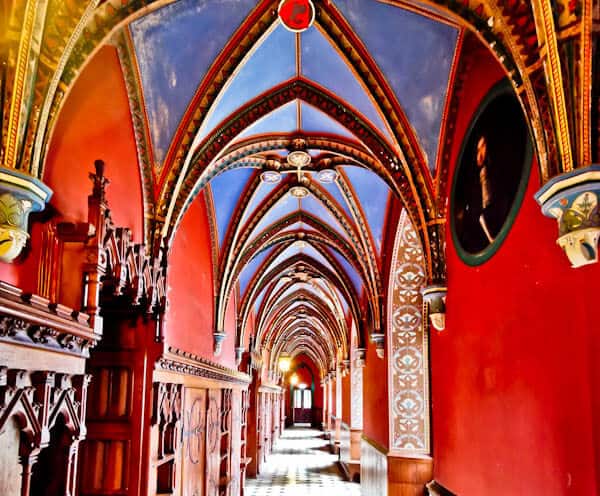 In my opinion, the princesses rooms are more impressive than the Queen’s rooms.  Firstly, they are more spacious.  Secondly, the corridor is more spectacular than that of the Queen.  Its corridor design to me resembles that of the lower part of Sainte Chappelle in Paris.  Within the rooms some of the features have been inspired by fairy tales. 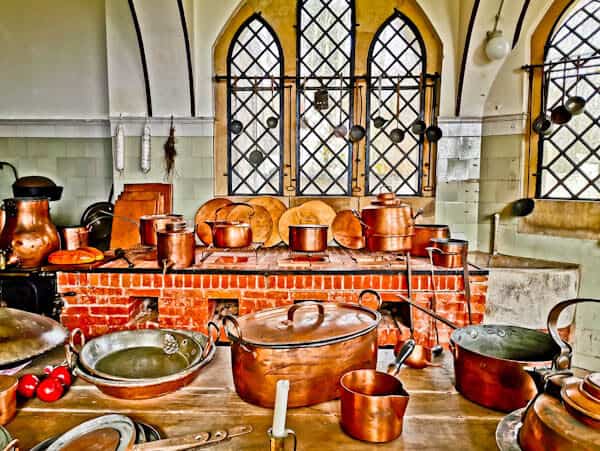 As you would imagine, the castle kitchen is huge.  What’s more it’s full of copper pots and pans therefore extremely photogenic.  Something particularly interesting are the 365 different cake molds.  Each day of the year, every cake was unique. 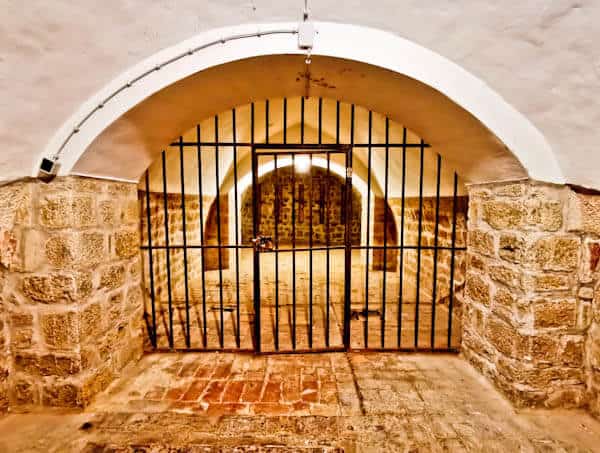 When I visited Leipzig, they traditionally used underground cellars to store their Leipzig beer.  In contrast, royals here in Hannover would use their cellar to store fine wines and champagne. 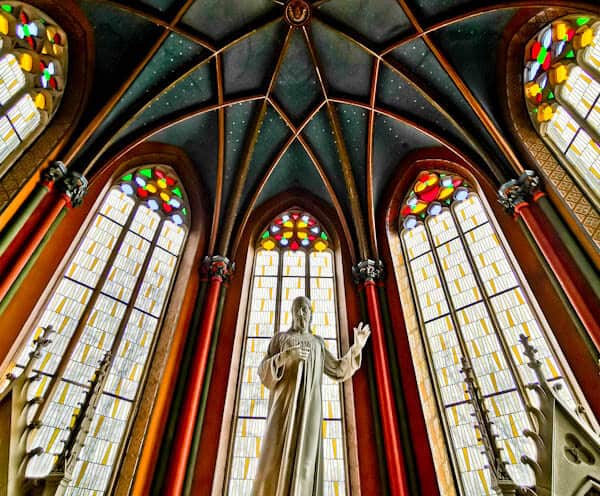 I made a comparison earlier to Sainte Chapelle in Paris.  It’s true that this chapel was designed with huge influence from this French chapel.  Something which impressed me is they present Jesus living as opposed to most chapels who portray Jesus dying in some way.  However, compared to Sainte Chapelle, they have a statue of King Louis IX in place of Jesus.  Lastly, the windows have been shattered and replaced throughout history therefore the ones you see today are not as impressive as the originals. 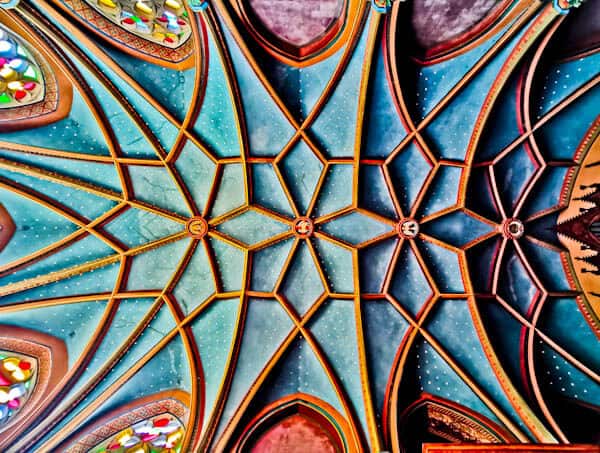 Look up at the chapel ceiling.  This presents yet another reason to visit Marienburg Castle. 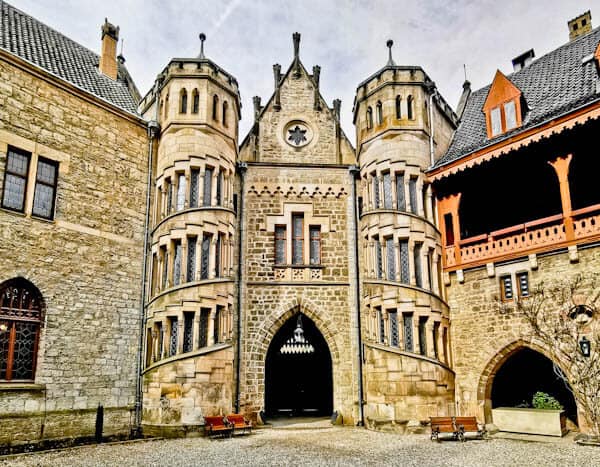 After visiting the interior, take your time to explore the castle courtyard.  On show is spectacular architecture and several unique photo spots.  Instagram photographers will be in their element as you explore the nooks and crannies of the courtyard. 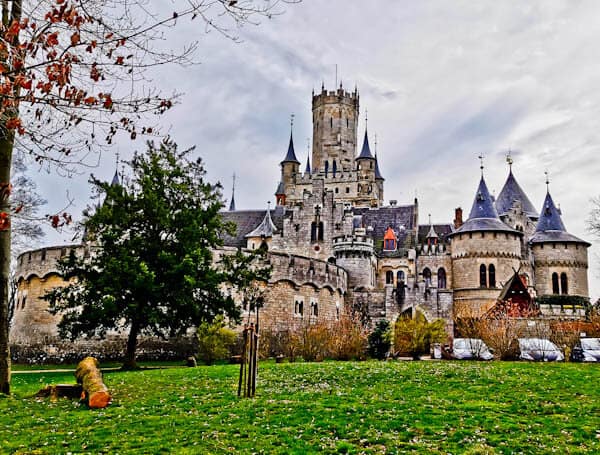 For me, the castle photographs best from the car park / bus stop area.  However, it’s worth following the trail around the castle to view it from different angles. 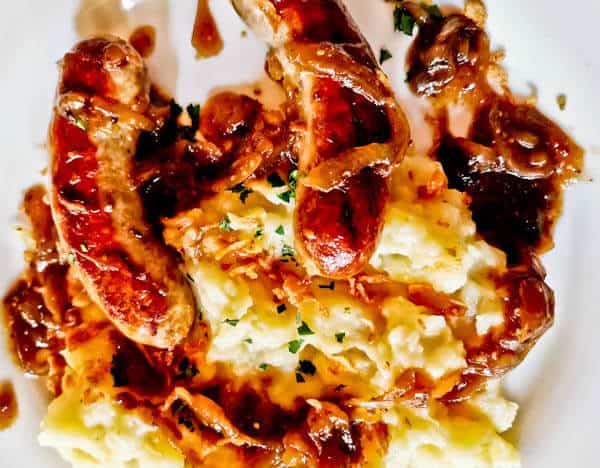 I’m sure you will be hungry after touring the castle interior.  The on site cafe offers cooked meals, snacks, beer, as well as hot and cold drinks.  I treated myself to a plate of German bangers and mash.  Something else which tempted me were the fresh cakes on display.

Enjoy Your Visit to Marienburg Castle 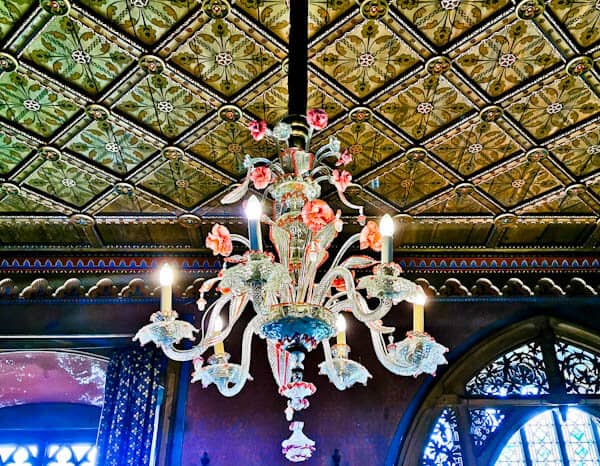 I’ve mentioned the main sights of this beautiful castle and I’m sure you’re inspired to visit.  However, there is much more to see in this castle.  Those with attention to detail will be particularly rewarded.

How to Get to Marienburg Castle from Hannover 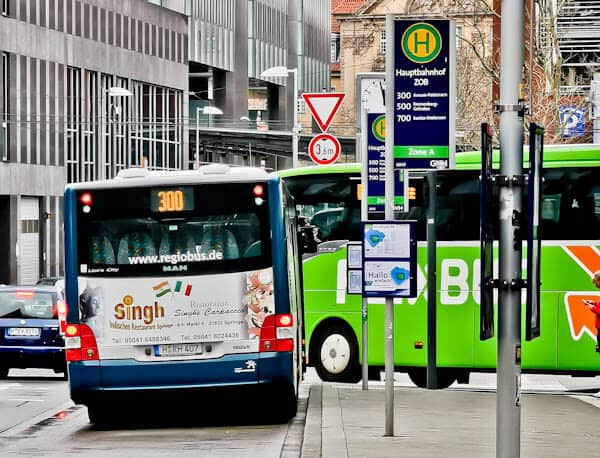 You can reach Marienburg Castle on one bus from Hannover ZOB.  Simply board bus #300 towards Pattenson.  Once you arrive in Pattenson this bus then becomes #310 (no need to change) which stops in front of the castle.  When you return, simply go back to the bus stop and wait for #310.  Again, in Pattenson this changes to the Hannover #300 service therefore no change is required.  Finally, to check the timetable visit the Regiobus site (in German).  Alternatively, visit the Hannover tourist office opposite the train station and ask them for the current timetable.